With Remembrance Day just around the corner I thought it important to mark this occasion with a non-ham radio blog entry.

My Dad was a very special guy to me, and I can’t, even now, begin to describe how I felt on the 23rd May, 1993, when he passed away. Not a day has gone by since then when I have not taken a moment each day to think about him. 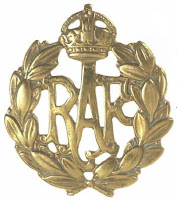 He enlisted in 1942, at the age of 16, in the Royal Air Force Regiment, and after his basic training and then trade training as a signaller, he was posted to 2816 Squadron, RAF Regiment where he spent the entire war training and then fighting through North West Europe with them. Dad saw action at the D-Day Landings, Rouen, St Pol, Moerkerke, the Leopold Canal (December 1944), Damme, Grimbergenand and Woerndrecht/Deurne, where the Squadron was based during Operation 'Bodenplatte' (the Luftwaffe attack on Allied airfields on 1 January 1945). Further moves east took it to Antwerp, Ahlhorn, Hustedt and Celle, where it disbanded in June 1946. After the Squadron was disbanded he was posted to 2742 Squadron at RAF Station Ramat David in Palestine, from where he was eventually discharged in 1948. ﻿﻿﻿﻿

As far back as I can remember he regaled us all with stories about his war experiences. I suppose looking back on it now it was his way of getting therapy from some of the stuff he witnessed while overseas.

Every two years my Dad faithfully returned to the UK to attend 2816 Squadron's reunion, always held in a large pub in Glasshouse Street in London, and always well attended by its Veterans. Those of you with a military background will appreciate the humour of holding a military reunion in "Glasshouse" street! He always came home with new stories, as somebody always jogged his memory about a long forgotten event. 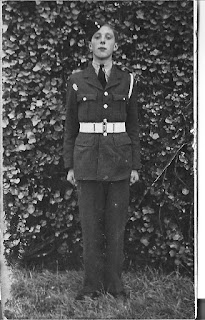 My Dad was not a special person, just one of a couple of million who felt it was their duty to step forward, and do something for their country at a time of great need.  Duty, was a powerful word in those days, and todays generation would do well to remember that citizenship, is not a free ride.

Of course there has to be a ham radio connection to this story....after my family immigrated to Canada in 1966 my dad became a ham, a natural thing for him to do considering his war time service as a signaller. He loved operating CW, and many an evening I remember sitting with him at the kitchen table, his SB-101 blaring 50 wpm CW at us, and him sitting there reading his library book, drinking tea, and copying the CW…all at the same time.

He was licensed in 1970 as VE7CVQ, a callsign that I now very proudly hold in his memory. That callsign only gets used three times a year these days, his birthday, the day we lost him, and Remembrance Day.

Posted by Blogmaster at 12:15 3 comments: Links to this post

Buddies in the Caribbean

The “Buddies in the Caribbean” DXpedition group, specializing in 100 watt or less low power radios and the Buddipole portable antenna systems, will be in St Lucia (J6) on 5-13 December, 2010.

There will be 3 villa stations in operation plus daily battery-only QRP portable operations operating on 160m thru 6m, propagation permitting.

QSL via the J6/homecall of the operator (SASE), eQSL, or LOTW. For current announcements, see our website at http://sites.google.com/site/caribbeanbuddies or our daily blogsite at http://caribbeanbuddies.blogspot.com/. The website has an on-line chat feature for realtime dialog with the dxpedition team. 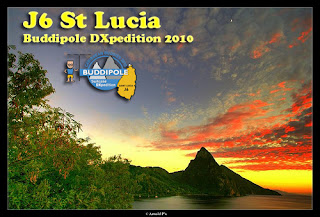 It's amazing how good the Buddipole system actually is.  I'm really looking forward to working Budd W7FF, and the rest of the guys, on this Dxpedition. Hopefully from somewhere were I, too, can use my Buddipole!
Posted by Blogmaster at 15:18 No comments: Links to this post

I have just read the bulletin issued by the RAC President, Geoff Bawden VE4BAW, from the IARU Region 2 conference in El Salvador.

Amongst the pearls of wisdom Geoff wrote about was this one: "Canadians will also be interested in HF band planning in 40m (now that short wave commercial stations have left the band)......"

Er.....excuse me Mr. President...have you actually been up on 40m lately? I hate to tell you this Geoff, but 40m above 7.200 is full of Chinese, North Korean, and Spanish commercial shortwave stations operating there on a nightly basis! There is also a Chinese station that broadcasts nightly in the middle of the old CW novice portion of 40m making that part of the band almost unusable as well. These stations have not “left the band” as you put it; they have simply moved up the band a few Kcs and have continued on as before!

Looks like somebody didn’t do their homework…..or has been spending far too much time on 2m!
Posted by Blogmaster at 17:36 No comments: Links to this post

Friday afternoon saw Dave-VE3DZE, George-VE3SIQ, and myself head north on Hwy 15 to the Whispering Pines Scout Camp, on Otty Lake, to set up their Jamboree on the Air stations.
It was pouring rain with winds 30 kph gusting to 60 kph when we arrived, and that situation didn't change until well after midnight.  It was, as they write...."A dark and stormy night..."

This was the first time we had done the JOTA from the Whispering Pines Scout Camp, so it was all new terrain for us.  The camp is a beautiful spot, all wilderness, and no buildings allowed there at all.  In fact once you are there you would not guess for a moment that you are actually only 6 Km south of the Town of Perth.  The camp has many large trees....all waiting to be strung with dipole antennas, and it is also very well looked after by their Camp Warden - Stan.

Friday evening saw us simply set up our camp and the screen tents we were to operate from.  It's a good job we brought as many large tarps as we did, because we used them all to keep everything dry.

After we finished setting up we drove into Perth and had supper at Michael's restaurant.  The food there was excellent.  It was also a great opportunity for us to take our time and dry out.

We used wire dipoles for 80m and 20m, and the Buddipole for 40m and 6m dipole.  All the antennas worked exceptionally well, and even though they were not that high off the ground, we did get a fair bit of DX from them.

Saturday morning came and the rain had given way to a beautiful blue sky, and the winds dropped to nothing around noon.  One of the Scout leaders lent us his 5000Kw generator, which was a stroke of good luck as I doubt our batteries would have lasted as long as we ended up needing them.

Dave-VE3DZE and I shared one screen tent to operate from.  It wasn't that bad as we used our field day coax notch filter set, and that took out any interference we would have had being so close.  Dave made some good contacts on 20m during the day, but while we had hoped to work some European stations doing JOTA, we never heard any at all, and none responded to our CQ's.

For most of the day we stayed put on 7.169 and worked N2Y, who was working the JOTA from a scout camp near Constantia, NY.  It was interesting to listen to the American scouts describe their scouting system to our Canadian scouts.  Of course it was the fact that Canada has Coed scout troops, with real live girls, these days that really peaked the American scout's attention!

George-VE3SIQ worked the 80m band for most of the day.  There were only a few signals on 80m, so a few of the net controllers for the ONTARS net on 3.755 helped us out by talking to the scouts. Thanks for doing that guys, you really brought big smiles to the faces of dozens of kids!

I managed to work a good number of stations on 40m, but it wasn't until late in the afternoon that I discovered that the power had been turned down to 10w all day!  Of course, before I discovered that I was operating QRP, I worked DR1A and DR1L, both in Germany.  Not too bad for QRP into a Buddipole dipole at 18 feet off the ground.

JOTA is an excellent method of introducing young people to our hobby.  We had several of the scouts hang around the radios all day.  In fact one young lad, Alex, was so interested in ham radio I sat him down and allowed him to work a few contest stations, under his own steam (and my supervision), during the NY QSO Party that was also going on that day.  The kid is a natural!  Larry Palmer-VE3LFP, who is a scout leader in that area is going to try and find the young fella a local Elmer so he can continue with the hobby.

JOTA and ARES are a natural fit.  It provides a good scenario that allows ARES to deploy to the field and set up and operate under realistic conditions.  It also gives excellent exposure of our great hobby to the youth of this country, which we all know we sorely need given the age of most of us "Olde Farts".

So, given this natural fit of JOTA and ARES, one must ask why the RAC Field Service decided to hold the Canadian National ARES SET on the same weekend?  And while we're on this subject, why was there not a RAC Bulletin issued to advise hams of the fact that JOTA was taking place.  At least then we could have possibly had more hams on the air for the youth to talk to.

Once again, RAC proves to us all that they are not paying attention on how to attract younger hams....or do they really care about attracting youth members?  JOTA happens every year guys....on the same weekend in October....and has done for 53 years.

The hams from Kingston provided operators for two JOTA scout camps, for about 300 youth combined between the two, and Bill-VE3CRU, operating from Mossport Raceway, had 300 scouts at that location go through his portable shack alone last weekend!

How many more youth across the country could have had good exposure to the hobby if our ARES groups were not tied up with an ineffectual exercise?  RAC wasted a wonderful opportunity last weekend to showcase our ham radio hobby to the youth of this country.  ARES exercises can be held any weekend of the year, but there's only one JOTA per year.

So please RAC executive and directors, don't cry to us about the lack of youth in our hobby.  We're trying our best to get them interested, but once again you greatly let us down!
Posted by Blogmaster at 16:37 1 comment: Links to this post

The launch of ARBONET-4 will take place on Saturday October 9th, 2010 from the Paris, Texas Hamfest. 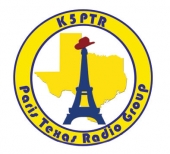 The ARBONET-4 launch is planned for 9:00 AM from the parking area of the fairgrounds.

ARBONET-4, the fourth in the ARBONET series of High Altitude Balloon flights, will be a demonstration and training flight utilizing beacons on three different amateur bands: 6 meters, 2 meters and 70 centimeters.

Give a listen and see if you can hear the balloon!
Posted by Blogmaster at 17:55 No comments: Links to this post