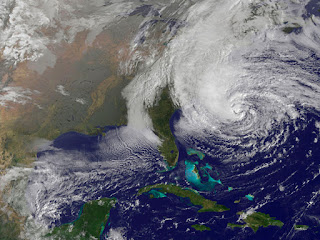 Quite the blustery day here in Kingston as Hurricane Sandy starts to come through the region.  We are expecting the winds to gain in strength over the evening and late into the night.

It will be an interesting drive into work tomorrow morning, and I'm fully expecting trees to be down on the roads, and the power to be off.

Frontenac Emcomm started a listening watch at 0800 Local this morning (Monday) on both local Kingston repeaters, as well as the US 7.268 Hurricane Watch Net.

The County CEMC emailed at 1030 this morning inquiring what the groups standby status is, so things are starting to get stepped up around here.

For those interested there is a lot of available information on the US Hurricane Watch website at: www.HWN.org.

Posted by Blogmaster at 17:10 No comments: Links to this post

It was a great day to be out operating portable today.  The weather here in Kingston was mainly cloudy and windy, but still warm enough not to have to wear a jacket outside.

Right after coffee this morning I took the ferry to Wolfe Island, which surprisingly is already using the alternative winter dock on Wolfe Island due to really low water levels.   After a short 8 Km drive I arrived at the small two car cable ferry to Simcoe Island, which was also having some major issues due to low water.

The ride over to Simcoe Island was really rough and I'm pleased to report that my Ford Ranger received a free car wash on the way over with all the heavy spray coming over the bow.

After a 10 minute drive I was at the very far end of the island, very near the Nine Mile Lighthouse.  I parked right at the end of the road and set up my 31' vertical and more radials than ever before.  Radio of the day was my IC-703 with its 10 "screaming" watts.

The bands were really busy today and the SFI numbers were excellent.  We had the Worked all Germany contest, JOTA, the W / VE Island QSO Party, and the NY QSO Party on the bands all at the same time, so lots of action to be had.

First station in the log was DL0TS, a club station in Lierderbach, Germany, this was at 1500 utc, and after that the contacts just kept coming.  I was impressed with the IC-703, it really gets the signal out, and more often than not I got the DX station on the very first call.

After two hours in the chair I had this feeling I was being watched, but there is nobody around there at all, the site is extremely quiet and peaceful.  In fact I didn't see another person there all day.  Looking over my shoulder I was greeted by a line of about 20 brown cows all looking at me.......wondering what the hell all the noise was I suppose!

After a quick bite to eat and a drink it was back at it.  By 1830 utc there were 30 QRP contacts in the log and it was time to head home. It was a really good day, and a welcome break from the house buying that's been going on around here lately.

The only downside to the whole day was the number of LIDS who chose to tune up right on top of either a QSO in progress, or a station calling CQ.  Why do people do that???!!!

And lastly, it was nice to hear all the youngsters on the air today with their JOTA stations.  Let's hope more than a few of them catch the ham bug!!
Posted by Blogmaster at 21:45 No comments: Links to this post 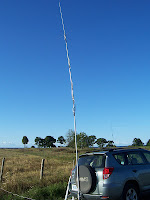 This weekend, 20th & 21st October is shaping up to be a pretty busy one for Island and Lighthouse activations here in Eastern Ontario.  It is the W / VE Island QSO Party weekend and many hams will be heading out to take part.

So far we have the following anouncements....

Dave VE3FOI will be activating Tintern Island - ON 254.

Tim VA3TIC and Derek VE3HRW will be activating Howe Island - ON 023.

Doug VE3GJ will be activating Henley Island - ON 007.

Jerry N1Qll will be doing a first time activation of Mistake Island, Maine.

Also, John VE3ISE will be activating both of the Port Dalhousie Lights - CAN 540 and CAN 541.

On top of these activations we also the Jamboree On The Air this weekend.  We have two local stations going on the air for this event.  We have VE3SFD operating from Otter Lake Scout Camp, and VE3SIQ operating from Whispering Pines Scout Camp.

So a busy weekend, let's all hope the SFI Gods are in a good mood and cooperate so we can all have a good time!
Posted by Blogmaster at 21:28 No comments: Links to this post

Frontenac Radio Group will be hosting Girl Scouts and Boy Scouts from the Perth and Ottawa area on Saturday, October 20 and Sunday, October 21, at Whispering Pines Scout Camp, starting at about 0900L.

Call sign in use for the weekend will be VE3SIQ.

Boy Scouts and Girl Scouts all over the world will be participating in the Jamboree on the Air. 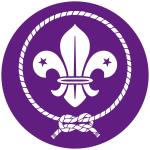 This is a great opportunity to showcase ham radio to our younger generation, so if you hear a station calling "CQ JOTA" give them a shout!
Posted by Blogmaster at 20:24 No comments: Links to this post

Sunday at the Lighthouse

On a positive note.....it didn't rain!  It was very cool though, the high was only +8C and there was a pretty good breeze down by the water to make it feel real cold.  Shades of winter days to come!  After the summer we have had it is very hard to start thinking of how to dress for the cooler weather. 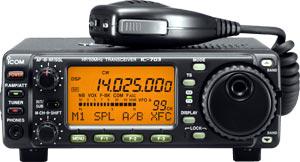 Rig of the day was the IC-703 and the antenna was the "Chilicon Special Mk 2".  Once again this setup did a great job.  We made a good number of contacts, from N6O in Santa Barbara, California, to DL/PS3LPG in Weeze, Germany, and a ton of others in between them.

What is amazing is that I was kind if lazy today and I only put out two 33' radials, not the usual small forest of wire that is usually strewn about the ground, and to be honest I didn't notice any difference in antenna performance.

Today Larissa-VE3KGC came along with us.  Larissa is a fairly new ham, and today we had her on the air with her "new" Ten-Tec Scout.  It's a really nice little rig and it performed very well today.  This was the first time I have seen this rig in action and I was impressed with it.

The numbers were not very impressive today, we had: SFI-98; A Index-6; K Index-1; and the SN-39.  We certainly seen a lot better over the past few weeks.

Oh well, hopefully it will get better for next Sunday when I'm going to give George-VE3SIQ a hand attempting to activate, for the second time, Brewer's Mill Island.  Hopefuly this time we will get the required 26 QSO's.  I'm starting to like this moving houses, it gives me another excuse to get out, decompress and play radio.
Posted by Blogmaster at 17:06 No comments: Links to this post

I'm in the process of taking down all the HF and VHF antennas at my current QTH due to the upcoming move to a new and much bigger QTH.  So postings on the Blog have had to take a back seat for a while....and probably will do for a few more weeks.

However this coming Sunday I, and several others, will be out at the Nicholson's Point Light for a day of portable operating.  This will be the very first activation for this light, CAN-1425 after we had it approved and the ARLHS assigned it an official number last year.

The light is in a small lakeside park, and because of the popularity of this park we can only activate the light in the cooler weather, in order to stay clear of the crowds that normally swarm the place.

Three HF stations will be on the air operating as VE3FRG. Frequencies will be:

We are all praying to the weather God for a sunny, dry, but cool day with excellent prop!   Here's hoping!
Posted by Blogmaster at 17:01 1 comment: Links to this post