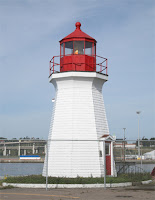 If you're looking for a few lighthouses and islands to activate in the next thirty days, have a look at this PAGE.  Looks like Chris, VE3CBK, will be a busy boy for a while and I'm looking forward to working him on Grand Manan Island.

I am planning on activating Big Island, ON-090, on Monday, July 29th. Big Island is in the Bay of Quinte and has not been activated for many years, so I'm looking forward to that activation, it should be a busy one.  I'm hoping to have two HF stations up and running for this event if I can talk another local ham to come along.

Posted by Blogmaster at 22:46 No comments:

Really?  Only Germany objected to this proposal??


A World Radiocommunication Conference 2023 (WRC-23) agenda item proposing to study a range of frequencies, including potentially reassigning 144 – 146 MHz as a primary Aeronautical Mobile Service allocation, drew little opposition at a meeting of the European Conference of Postal and Telecommunications Administrations (CEPT) Project Team A. The team is responsible for some aspects of CEPT WRC positions, and the meeting was held June 17 – 21 in Prague, Czech Republic. Introduced by France, the proposal targeting 144 – 146 MHz would be part of a broader consideration of spectrum allocated to the Aeronautical Mobile Service. Another issue addressed during the meeting concerned the sharing of the Amateur Radio 1240 – 1300 MHz band with Europe’s Galileo GPS system.
“We hear only one administration (Germany) opposed the 144 MHz proposal — no one else,” the UK Microwave Group tweeted following the meeting. Otherwise, it has been carried forward to the higher-level CEPT Conference Preparatory Group (CPG) meeting in August.
The International Amateur Radio Union (IARU), which was represented at the Prague meeting, expressed “grave concern” to any proposal that would include 144 – 146 MHz in the proposed Aeronautical Mobile Services agenda item. That comprises the entire available 2-meter band in ITU Region 1. IARU has pledged to make every effort to fully protect Amateur Radio interests and seek the support of regulators for their view.
IARU Region 1 President Don Beattie, G3BJ, said prior to the meeting that the IARU would “energetically” promote its opposition in Regional Telecommunications Organizations (RTOs) and the International Telecommunication Union (ITU) “to obtain assurances that the spectrum will remain a primary allocation for the amateur services.”
The 144 – 146 MHz band is allocated globally to the Amateur and Amateur-Satellite services on a primary basis and is the only globally harmonized Amateur Radio VHF band. A widely used segment of the Amateur Radio spectrum, 2 meters supports a broad base of terrestrial users, repeater systems, and satellite stations, including the International Space Station.
According to the meeting minutes, the proposal provides no justification for targeting 144 – 146 MHz, and the IARU believes that sharing with airborne systems likely would be difficult and lead to constraints on the development of the Amateur and Amateur-Satellite services there. IARU suggested that alternative proposals might be developed that could provide further spectrum for the aeronautical applications without impacting this Amateur Service spectrum.
IARU is expected to brief member-societies, requesting that they discuss the French proposal with their governments in advance of the August CEPT-CPG meeting. France could seek to introduce the same proposal to study 144 – 146 MHz for aeronautical use into other RTOs.
Meanwhile, further discussion on the 23-centimeter band study proposal is anticipated prior to the Conference Preparatory Group meeting in August. The proposal was raised in the wake of reports of interference to the Galileo navigation system, but IARU has said it’s aware of only “a handful of cases” of reported interference to the Galileo E6 signal on 1278.750 MHz. Work on this issue will continue in other specialized CEPT forums in the interim.
Posted by Blogmaster at 16:18 No comments: 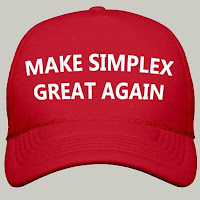 For a long time a good friend of mine has said that if we don't use it, we'll lose it.  Well, have a read of this news out of France today.

This past weekend was the 48th year of the Rideau Lakes Cycle Tour, and the 13th year the Frontenac Radio Group has provided the communications through our county.

The event has cyclists ride from Ottawa to Kingston on Saturday, and ride back to Ottawa on Sunday.

We had 1800 riders on the road over four different routes, and three ham clubs manning over 30 communication points.  It's a pretty big operation and takes a while to set up.

Thankfully, the weather was fantastic both days and that really helped with the smooth running this year.  Not one single major issue popped up in our sector this year.

The new VE3FRG C4FM repeater worked exactly as advertised, and we had zero issues with that as well.  Usually, we have an issue with the Lavant 2m repeater which we use for an inter-sector liaison station.  This year we had no issue getting into the Lavant repeater due to the 40' mast that VE3ORY brought along, so that was great.

As we are an Emcomm Club, this cycle tour is an excellent way of practicing deployed operating and operating under a directed net for up to eight hours a day for the whole weekend.

Hopefully, next year will go as smoothly as this year.

Here are some photos of the event, thanks to Rick, VE3ORY.

Posted by Blogmaster at 19:01 No comments:

Next weekend, June 8th & 9th, is the 48th running of the Rideau Lakes Cycle Tour, and I believe the 13th year the Frontenac Radio Group has provided communications for the event.

This year the weather isn't looking too good, but hopefully, that will change as this week progresses.  The last thing we want is rain for the weekend.

There are 1800 riders registered this year, so it will be a busy event, and a safe one we hope.

For those hams who regularly use the VE3FRG repeater here in Kingston, it will be out of service next weekend and reserved for the Bike Tour traffic only.  If you need a repeater please use the VE3KBR repeater on 146.940- with a 151.4 tone. 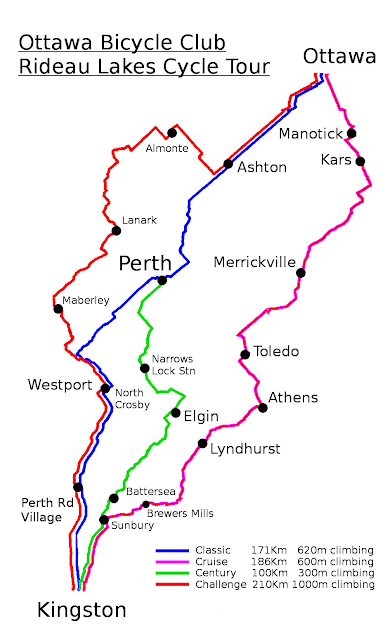 Posted by Blogmaster at 18:00 No comments: