Here's a couple of things I'm getting ready for:

The first event is the ARRL VHF QSO Party on September 11th and 12th.  This event runs from 1400 - 2300 hrs local time, and I plan to operate from Fort Henry Hill....which is just about the highest point in Kingston.

The second event is QRP Afield, which is sponsored by the New England QRP Club.  This event is always the third Saturday in September.

This year I will be camping at Rideau River Provincial Park with members of the Ottawa Valley QRP Society and taking part in this event.  I'm looking forward to discussing QRP activities with some of the experts on the subject over the weekend, as well as getting some relaxing camping in at the same time.
Another reason to attend QRP Afield is to meet up with Martin, VA3SIE, to discuss the start-up of the new VE3 SOTA Association.  Summits on the Air (SOTA) is an award scheme for radio amateurs and shortwave listeners that encourages portable operation in mountainous areas. SOTA has been carefully designed to make participation possible for everyone - this is not just for mountaineers! There are awards for activators (those who ascend to the summits) and chasers (who either operate from home, a local hilltop or are even Activators on other summits). 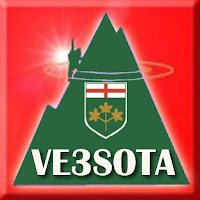 SOTA is now fully operational in many countries across the world. Each country has its own Association which defines the recognised SOTA summits within that Association. Each summit earns the activators and chasers a score which is related to the height of the summit. Certificates are available for various scores, leading to the prestigious "Mountain Goat" and "Shack Sloth" trophies. An Honour Roll for Activators and Chasers is maintained at the SOTA online database.

Stay tuned for more news on the new VE3 SOTA Association!
Posted by Blogmaster at 22:23 No comments: Links to this post

Sunday dawned cold, wet, and really miserable.  Ever since I left the Canadian Forces I had forgotten that 0430 hrs existed, and trust me it's no time to roll out of a warm bed to launch yourself down Hwy 401!

After a quick stop for breakfast I arrived at Point Petre at 0930 hrs and began to set-up in the light wind and rain, after I had checked in with Marie-VA3ECB.  I used my Yaesu FT-857D, YT-100 automatic tuner, and two deep cycle batteries.  My antenna was my usual buddipole being used in the vertical mode.  I was hoping that John-Henry-VE3CAK could hear me so he could spot me on a DX cluster, but that was not to be.  J-H could not copy me at all, and I could not even hear him.  So it was back to the old fashion method, calling CQ. 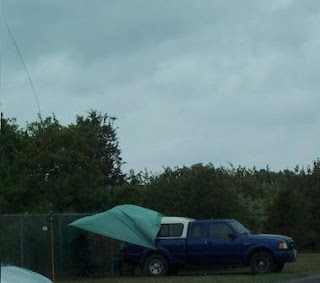 The first station in the log was John - KB4CRT from Micanopy, Florida, with a nice 58 signal.  The next four stations where also all from Florida, and then the band switched and Oregon and California started to roll on in.  Two Canadian contacts were made, Boris - VE4BG from Winnipeg and Rick - VO1SA from St. John's, Newfoundland.  The only real DX contact for the day went to Javier - VP9/NM6E holidaying in Bermuda.

I had a good QSO with Jim - WB2LHP, who was operating from the Old Mission Point Lighthouse in Travis City, Michigan.  With 50w going each way I felt pleased with my 54 report from Jim.  Next up was Leo - K1KJC, from Vinalhaven Island in Maine, IOTA NA055.  Again with 50w I received a 55 from Leo as my signal report.

The operating site was right across the road from the Trenton Air Force Base HF antenna farm.  It was nice to dream while gazing at nine 300 foot towers, and two huge log periodic antennas. 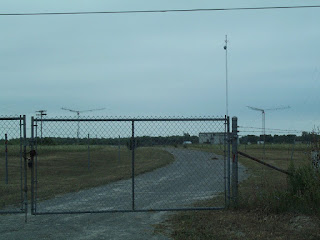 I was half expecting some interference from them, but thankfully it was a Sunday, and that means the good air force guys who operate them where still in bed........
Propagation today was a SFI of 75, and the K and A indexes where both at 1, and no sun spots to be seen for the first time in 55 days.
By mid-afternoon the wind and rain had started to gain some strength. and I thought it wise to pack up and head back to Kingston.  Overall it was a good day.  Thirty-two contacts were made, including a few on each coast.  Not too bad for a lousy SFI day.
Posted by Blogmaster at 20:42 No comments: Links to this post 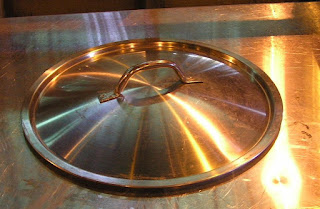 Has anyone noticed that the number of "Lids" we hear on the air is increasing? Has anyone noticed that the standard of operating is falling to a level lower than it was at the height of the 1970's CB craze? Why is this?
Why do we have people (I won't call them Hams) sitting on 7.181 using language, and talking about subjects that would make a Toronto hooker blush? I won't even start on K1MAN and his "ownership" of 14.275, nor will I get into that disgusting piece of work from Saanich, BC, who's language and filthy racist comments on the air have to be heard to be believed, neither of whom are fit to be members of our great hobby.
Why is their behavour allowed, and why hasn't Industry Canada or the FCC stepped in and put a stop to this garbage? It just boggles the mind that they haven't yet done so. We know that hundreds of complaints, and recordings of them, have been sent in to the authorities. What's the holdup?
Then we have the idiots who make a habit of chasing DX when they have no clue how to do so.  The other day, as an example, a station from the Ivory Coast called CQ on 20 meters, and was quickly pounced upon by about 30 people, all screaming their callsigns at the top of the lungs (as if this makes a big difference getting through). Several of these clowns continued to scream their callsigns over and over and over and over again....even when the DX station was in a QSO. Do these people really think that this is the way to work DX? Do they really think that the DX station is even going to work them after their unprofessional behaviour? I don't think so!  Is this behaviour the reason I hear more and more of the DX stations saying "yep, I worked you, but you're not in the log"?
A wise old Elmer from California once told me that "anyone can become an Amateur Radio Operator, but it takes great skill, knowledge and good manners to become a HAM." Therefore it stands to reason that some of the people we hear on the air today will NEVER become Hams!
Posted by Blogmaster at 15:41 Links to this post

I will be taking part in this event with the Frontenac Radio Group, activating the Point Petre Lighthouse in Prince Edward County. It's newly issued lighthouse number is CA0026.

Antennas will be two Buddipoles, and the radio will be a Yaesu FT-857D with a YT-100 auto tuner.

Get on the air and talk to Lighthouses in Canada, the UK, Australia, and around the world.
Posted by Blogmaster at 22:10 No comments: Links to this post

Welcome to my Blog Spot. This is where I will record my adventures in Ham Radio, as well as my occasional rants on various subjects.

My main Ham Radio interests are QRP and portable operations, as well as Island and Lighthouse activations. I am also involved with the new VE3 SOTA Association.

I am a member of the Frontenac Radio Group and the Frontenac County ARES.  I'm also member No. 162 of the Polar Bear QRP Club.
Posted by Blogmaster at 21:52 Links to this post