RAC and the Hallucination

I’ve been pretty quiet on the subject of the RAC Empire for the past little while.  However, having read the Blog of Peter, VE3HG, the other day, I felt I too should comment on the state of ARES in this country……not that anyone from RAC will ever listen!

Peter mentions the lack of an ARES reporting structure.   Perhaps people have forgotten that we once had in Ontario an excellent on-line reporting system that was run by our ex-SEC, Bob Gammon, VA3RX.  It was an ARES resource website that had a dedicated page were the DEC’s and EC’s could fill in an on-line form, a monthly report, and submit it. Bob even paid for the website URL and hosting charges himself, not RAC.  Bob closed down that site after he had been unceremoniously fired for no reason from the Ontario SEC position.

I guess the question that needs to be asked is if individuals are so concerned with the lack of a reporting capability, why hasn’t something been done in the four years since Bob closed down the original site to rectify this issue?  Perhaps ARES needs its own national standalone website to solve this issue?

The one thing that a reporting structure could put an end to for good are the two and three member ARES groups that do absolutely no training and conduct no exercises.  And that, as Martha says, would be a good thing.

The other question being asked is why we do not have a VP for the Field Service these days?  I guess the answer is because the previous one quit because he must have been tired of all the constant BS coming downstream at him.   I actually like Doug Mercer, the previous VPFS.  I thought he was doing a great job, that is until he started listening to some of the Ontario SM’s and their idiotic ideas, then it went downhill from there.

RAC ARES needs to adhere to the “KISS Principle”, not the complicated and unnecessary pile of drivel that is currently being spouted by the so-called “experts”.  Some of our esteemed SM’s seem to be building empires that Julius Cesar would drool over, rather than concentrating their efforts in building a solid volunteer base to expand out from.  I have said it before and I will say it again, we are amateur radio volunteer emcomm operators, not sworn members of the Royal Canadian Corps of Signals Reserve!

The question of the legitimacy in the way RAC ARES groups are formed was also brought up in Peter’s Blog article.  Why are we so worried about this?  Do we really need RAC’s permission to form an emergency communications group?  No we don’t !!!!  Just call it an “EmComm” or “Public Service” radio group and just get on with it!  If RAC isn’t giving you the service and support you need, move on, forget about them, there’s other ways of doing business that does not include RAC. If you guys think that the agencies you serve worry about whether or not their emergency communicators are RAC approved….think again, they’re just glad you’re there helping them out with their communications issues.

Peter’s Bog also mentions the future requirement for Police Record Checks for ARES members.  Personally I don’t have an issue with this.  As it stands with the non-RAC affiliated Emcomm group I belong to, our served agencies do not require us to have a PLC yet, but that could change if a new CEO or CEMC is hired in one of the four municipalities we support and asks for them to be done.  No big deal, we’ll get them done.

The Blog goes on to mention that RAC “ARES may become so encumbered with bureaucratic, political and legal issues that it will be unable to function.”  I think they’re already there.  Have you seen the number of unelected appointees to the executive recently?   It’s becoming more and more evident that with Comrade Bawden also wearing the VPFS hat as well as his Presidential hat right now, nothing is being done at all with ARES, it’s simply being left to flounder along as it always has.

So the bottom line and the question that needs to be asked, is why are ARES members still supporting RAC, when it is so evident that RAC is not supporting you?  Ask yourself this, what tangible thing has RAC actually done for your ARES group in the past 12 months besides hold out their hand for your membership money?  I bet the answer in the vast majority of groups is “not a bloody thing”……which again leads us to the question, “Why are you still supporting them?”
It’s obvious from what we see and read that RAC has no real vision for ARES, and without a vision there can be no plan to actually execute.  In closing I’ll leave you with a quote from Thomas Edison that sums up RAC  - "Vision without execution is hallucination.”
Posted by Blogmaster at 16:56 No comments: Links to this post


Between planning for being made redundant at work, and a long cross-country trip I'm making later this year, it's been a busy time at the VE3CLQ shack.

One project that is now finished is the two go-boxes, an HF one and a VHF one.  I would have liked them together in one box, but given what I want to use them for it's easier to keep them separate. Many thanks to Don, VE3MNE, for his great help with these projects,

The VHF and HF antenna connections have been put through the lid of the box, and hidden in a top compartment.  When the box is closed up the only visible "radio thing" is the power pole connector that is on the side of the box.

As you can see there is lots of room left in the box for a headset, power cords, antenna coax, and the radio manual.  Total weight is about three pounds.

The VHF Box contains a Motorola CDM 1250 radio and a Coastal Chipworks TNC-X.  This box allows me to connect to RMS Express as well as use the radio for voice FM work.

Again there is a lot of extra room in the box for extra bits and pieces as I have in the HF Box.  The good thing about these two boxes is that they cut down the amount of gear that I pack when I do an island or lighthouse activation, and it certainly reduces my set-up time considerably.

These two boxes will make their debut on June 7th and 8th during the Ottawa Cycle Clubs "Rideau Lakes Cycle Tour".  This year is the 8th year our Club has handled the communications at the Southern end of the Tour, and it's always a great time.

Both boxes have already been tested and work very well.  Looking forward to getting out more and using them on a regular basis.
Posted by Blogmaster at 10:49 No comments: Links to this post

Sunday was an outstanding day to activate one of the local islands.  We had a beautiful blue sky all day and a temperature that eventually reached 18C.  The down side was the fact that the May Flies are out in force, getting into everything.....it's a good job they don't bite!!

It takes two ferry rides from Kingston to reach Simcoe Island, a large ferry that carries about 40 cars and another much smaller one that carries two or three, depending on their size.  So after the clubs weekly Sunday breakfast, Dave, VE3DZE and myself took ourselves off to the ferry dock to start the journey to Simcoe Island.

There's not much on Simcoe Island, a couple of working cattle farms and about 30 cottages or so.  The biggest thing on the island is Nine Mile Lighthouse, CAN-578, which we activate at least once a year, and especially for the ILLW each August.

We heard many European stations, nearly all of them 10 to 20 over S9, but they certainly didn't hear Dave or myself. The good propagation seemed to be reaching everyone but us!  There was some very deep QSB on the bands, and that certainly didn't help us at all.

Dave did manage to pull 6 contacts out of his FT-450, all of them in either the US or Canada.   It was very frustrating to hear the VE7's working S9 into Europe and nobody hearing us at all.  Oh well, any day playing radio......is better than a day at work.

Regardless of the fact that we didn't work any DX, it was still a great day out.
Posted by Blogmaster at 16:22 No comments: Links to this post

Well seeing how its been over a month since I updated my blog I thought I should get my act together and get on with it!!

It's been an interesting month to say the least.  The big news is that I will be made redundant from my job at the end of June.  This news has "sort of" taken the wind out of my sails, but we will survive and move on with things.

I must thank Tim, VA3TIC who came over and re-strung one leg of my 80m OCF Dipole that had slipped way down in the high winds we have recently had.  Tim managed to shoot a line about another 20' higher in the tree, so we're back up on that leg at 45'.

There has not been too much amateur radio work done around here for a few weeks, to be honest I have had other things on my mind, and radio has taken a back seat. But, having given myself a kick in the ass, plans are already under way for a few activities. 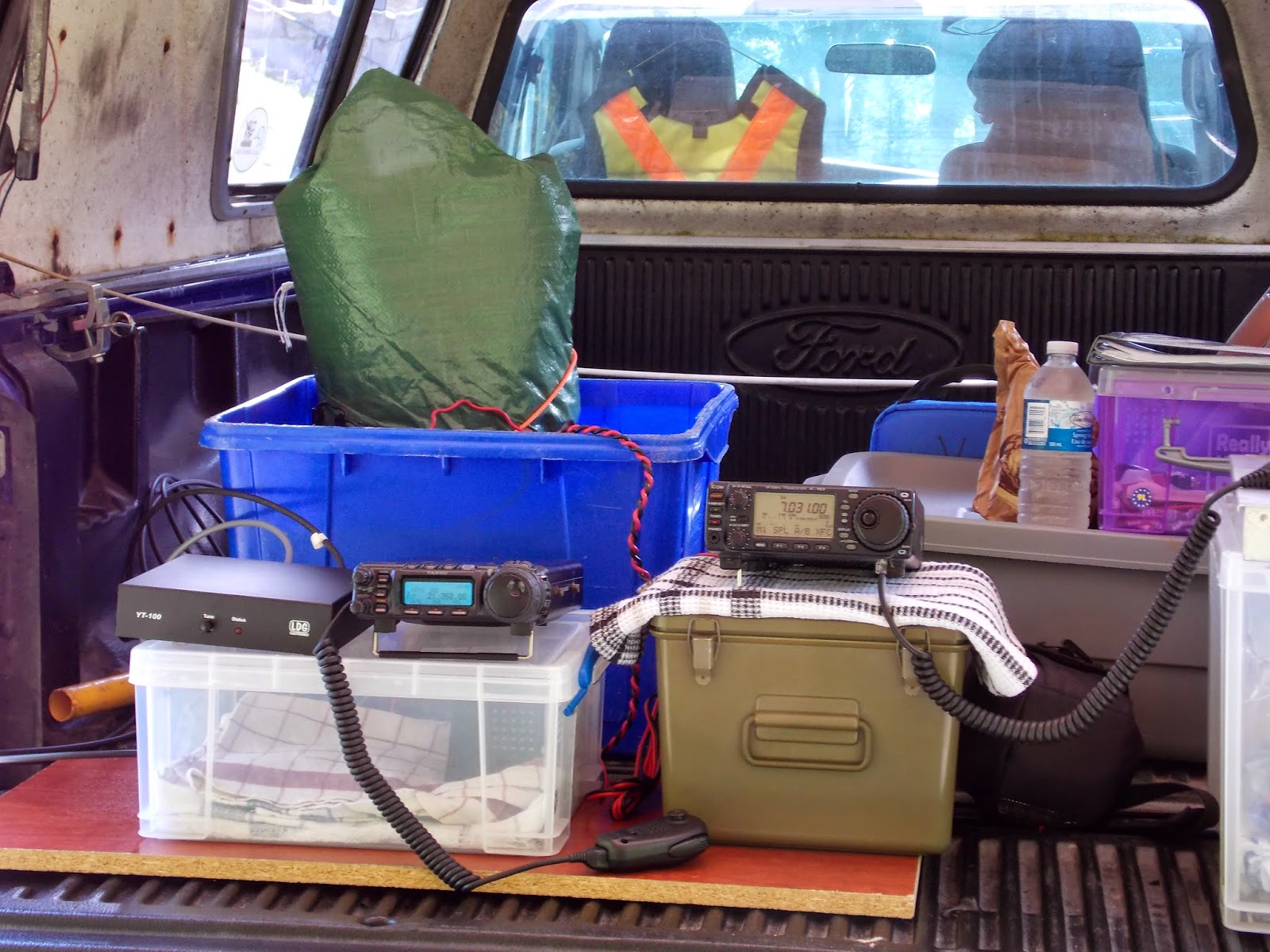 In fact the first activity will be tomorrow with the activation of Simcoe Island, ON-022.  The plan is to be on the air from 1400 UTC till 1800 UTC on the usual island activation frequencies...shown below:

And.......in other news it was very nice to be told that with my entry of 12, 096 total points in the 2013 ARRL November Sweepstakes, I have been awarded Top in Canada in the QRP category.  Thanks to all those stations who took the time and the effort to dig my small signal out of the mud!!

See you on the bands!
Posted by Blogmaster at 09:34 2 comments: Links to this post