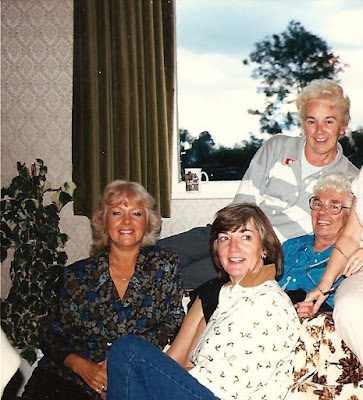 Rest in Peace Aunty Pat......you're all together again now.

God saw you getting tired and a cure was not to be.  So He put His arms around you and whispered “come to me.”  With tearful eyes we watched you, and saw you pass away. Although we loved you dearly, we could not make you stay.  A golden heart stopped beating, hard working hands at rest.  God broke our hearts to prove to us, He only takes the best.

Posted by Blogmaster at 19:16 No comments: Links to this post

How about this for a good evenings WSPRing on 30m?   This was last night at 2300 UTC on February 21.  Australia and South Africa....not too shabby for 500 Mw in the inverted L long wire.

Posted by Blogmaster at 13:14 No comments: Links to this post

Just back from our weekly ham radio breakfast and decided to put WSPR on for an hour or two, and the map below show's my first half hour on 30m.  It's not often I get into Africa and Australia in the same hour.

I am surprised at the lack of trans-Atlantic traffic though.  Normally Europe is booming in here at this time of day.

And, here's the propagation for this hour: 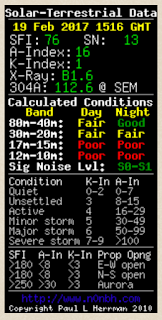 Posted by Blogmaster at 10:42 No comments: Links to this post

During these "quiet" times I have been continuing my propagation experiments using WSPR.   The following maps show the results of 500 mW into a 148' inverted L longwire antenna up ay 60'.

I'm hoping to get a 200 mW transmitter using a Raspberry Pi shortly, and then we will see what we can really do.

Posted by Blogmaster at 09:59 No comments: Links to this post 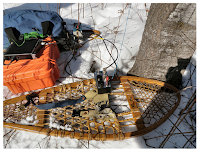 Not much going on around the shack to report.   The weather and propagation have both been pretty bad so not much radio work has been going on.

Hopefully this will change in another month as we get out to activate a few islands and maybe a new lighthouse.

My best buddy, VE3MNE, is retiring at the end of March, so who knows what trouble and adventures we will get up to together.   We are planning a mini-DXpedition to visit VE9FI in Hampton, NB, at the end of October, so we can take part in the CQ WW DX Contest from that QTH.  That will be worth several posts on here alone.

Other planned weekend activities, so far, include the International Lighthouse Weekend in late August, the W/VE Island QSO Party, Field Day, and the Rideau Lakes Cycle Tour in early June.


Posted by Blogmaster at 17:18 No comments: Links to this post