For the past 4 years the Society for the Preservation of Amateur Radio (SPAR) has sponsored an annual Winter Field Day, always held the last full weekend of January. 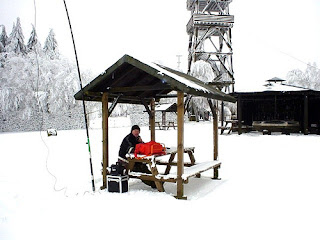 Not only during Field Day in June, do the bands come alive with improvised signals proving the ability to respond to emergencies. Since emergencies and natural disasters don't always happen in the summer, during Winter Field Day, frigid winds, icy limbs and bitter cold replace the thunderstorms and blistering heat of summer. In 2007 SPAR established a Winter Field Day event and invited all Amateur Radio operators to participate. The event was repeated in 2008 and was considered a success, so it was then designated an annual event to be held the last full weekend each January. In 2007 - 2010 the event was enjoyed by many, but it is time to issue the invitation for the Fifth Annual SPAR Winter Field Day!

The object of the event is familiar to most Amateur Radio operators: set up emergency-style communications and make as many contacts as possible during the 24 hour period. The rules encourage as many contacts on as many bands and modes as possible, because during a real emergency, the most important factor is the ability to communicate, regardless of band, mode or distance.

Mark it on your calendars, it's too much fun to miss!
Posted by Blogmaster at 19:59 3 comments: Links to this post

Alan Melia-G3NYK and Steve Nichols-G0KYA wrote a series of feature articles for the RSGB magazine, RADCOM, these articles have now been put together into an ebook, which is available as a free download at: http://www.infotechcomms.co.uk/Understanding_LF_and_HF_propagation.pdf

The ebook explains to the reader the propagation modes behind each band and explaining some of the technicalities of ionospheric propagation It looks at the at the D, E and F layers, Sporadic E, the MUF/LUF, using solar data, propagation programs, NVIS and much more.

These two amateurs have managed to persuade the RSGB to allow me to put them together into a single document, which is now freely available for amateurs worldwide to download.

This is an excellent resource for hams, of all experience levels.  Well done to these two guys for making this happen!
Posted by Blogmaster at 10:53 1 comment: Links to this post

The North American SOTA Associations (Canada and the USA) will have an operating event on Nov 13, 2010 from 1200utc to 2400 utc on Nov 14th, 2010. The goal is to encourage NA SOTA summit activations and expand the awareness of this unique operating program in North America. More information about SOTA can be found at http:/www.sota.org.uk.

The British SOTA Program encourages both summit Activators and and home-QTH Chasers through an extensive Awards program. Patterned after the IOTA program, SOTA is very popular in Europe and is quickly catching on in the North America as well as other countries. This will become an annual event for the NA SOTA Associations. Please visit the Yahoo Group site for more information and/or questions: http://groups.yahoo.com/group/nasota/
Posted by Blogmaster at 10:43 No comments: Links to this post

What I remember - Part 2

Alfred John Saunders, 1892 – 1981, was my great uncle and to me he was my “Uncle Alf’. He was known as something of a character within the family - a label he wore with some pride. He was forever in trouble with my mother for his repeated sneaking forays up to my bedroom when I was very young, to slip me cookies.

Uncle Alf was just a very ordinary man.  He worked hard all his life and looked after his family to the very best of his ability. But Uncle Alf was also a very brave man, and although he rarely ever spoke of it, he had gone through several nightmares during WW1.
﻿
﻿ At the outbreak of WW1 Uncle Alf joined the 1st Bn The Liverpool Scottish, and was quickly trained and shipped off to the western front. We know he fought at the Battle of Hooge on 16th June 1915, and at the first Battle of the Somme in 1916.

At some point after that he and his platoon were tasked to dig a mine under the German trenches, and dig they did. However, the Germans heard them digging and dug a counter mine under them. The race was on to see who could blow up their mine first. The Germans won and Uncle Alf, and those of his platoon who survived, spent seven days buried underground before they were dug out and rescued. At this point he was discharged from the army as unfit for further service.

Now any normal man would have said enough was enough, and that he had certainly done his fair share of duty. Not Uncle Alf!

You see when he was 14 he ran away to sea, and spent eight years sailing between Australia and Liverpool. This was not on steamships, but on real sailing ships. His stories of going around the Horn in winter were enough to make me turn my back on the sea for life. I have no desire to spend up to four months tacking back and forth off the Horn, freezing cold, always soaking wet, and climbing 100 feet aloft to change sails. Eventually through a lot of hard work he gained his Master Mariners Certificate and walked the quarterdeck.

So there he was back home in Liverpool, discharged from the Army as unfit to serve in the trenches, and looking for, as he put it, “something to do”. Well, off he went and joined the Royal Navy. With his Master Mariners Certificate in hand he was given command of HM Trawler Everton, sweeping mines in the River Mersey and the Irish Sea. One day while sweeping the Everton hit a mine and quickly sank. Uncle Alf spent several hours in the cold water before being rescued, and ended up with lungs full of bunker oil.

After a few months at home recovering, he was discharged from the Royal Navy as being unfit for further service. Shortly after, guess who went to the Army recruiting center and tried to join the army again? Lucky for us he didn’t pass the medical that time, or who knows where he would have ended up.

I last saw Uncle Alf in January 1981 at his flat in Prestatyn, North Wales, where he still lived alone. I was on leave from the Royal Air Force and we spent an hour talking about all things military, drinking tea and eating his famous biscuits, he was blind as a bat, but still a very sharp minded individual and still very much full of life.

I have his WW1 medals now and have had them properly mounted, polished, and cleaned.  He never wore them.  When I received them they were green with mold and had only tatters of the ribbons left on them.  They'll be proudly out on display this November 11th, right next to my Dads.

Uncle Alf past away at his home in February 1981, a month after I visited him, aged 89.  They don’t make heroes like him anymore. 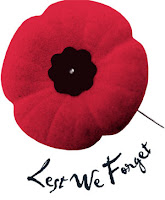 Posted by Blogmaster at 18:02 No comments: Links to this post