Something broke the local Internet this morning after our ham breakfast, and with no new books loaded in the Kobo I was forced to play radio to fight off the boredom.

Up to the shack I went, turned on the FT-950, and was nearly blown out of my seat by the signals coming in on 10m, 12m and 15m.  I spent a great couple of hours cruising the bands and managed eight solid QRP SSB contacts.....

So, whoever the kind soul was who ran into the telephone pole and cut the internet connection.......thank you for a most enjoyable morning!
Posted by Blogmaster at 16:09 1 comment: Links to this post

A few days ago a new blog made its debut, the Portable Activations Blog.  Most of my readers will know of the problem a lot of activators seem to have getting the details of their upcoming activations posted on certain websites.

The new blog will post any activation, Lighthouse, Island, or SOTA......it's a non-discriminatory blog.  The only goal is to get a bit more awareness to our portable activities out there so other hams can see what we're up to.

The URL for the blog is: http://ve3.blogspot.ca/  Please pass it on to any known activators, it will only work if as many hams as possible know about it, and use it.

Posted by Blogmaster at 16:37 No comments: Links to this post

Another year has past and Chilicon 2012 is now behind us.  What an outstanding weekend of ham radio, not because of the operating we managed to fit in, but because of the learning experience of it.  Many hours were spent discussing the finer points of radios, feedline, and antennas, and it was a delight walking around the sites checking out the amazing array of antennas that the guys were using. Don VE3MNE and I arrived at the campground at about 1430L and were met by Michael VE3WMB and Jim VA3KV who had already arrived and had set up their camps.  Chris VA3CME was there as well, he had arrived on Wednesday.....obviously in a hurry for the Chilicon experience, and I know Ying VA3YH was there, but I'm not sure if he arrived before us or not.

The afternoon sky did not look too promising, so Don and I hurried and began to set up the site.......and really, we finished not a moment too soon as the rain hit us and continued to come down for the next seven hours.  Luckily the wind never came up and rain just came down straight, not sideways. I'm pleased to report we didn't get wet!

After Friday supper of steak and veggies everyone descended on our site as we had it almost completely tarped off with two 15 by 20 tarps and everyone could stay dry under them.  The single malt arrived with Dave VA3ORP and the radio talk began.  It was a good evening with everyone getting to know each other or catch up with old friends.

Saturday dawned with a good sign - a blue sky!  After a good breakfast of sausage and eggs it was antenna erecting time.  We put up two antennas, the now famous 31' vertical "Chilicon Special" and a 44' doublet, and started to play radio.  The bands were excellent with 15m, 17m, and 20m just hopping with signals.  Just after lunch a good number of the Ottawa area hams arrived including VE3EMB, VE3CBK, VE3EUR, VE3MPG, VA3AMX, VE3GTC, and the star of the show: VA3QV.  It was a Who's Who of QRP. 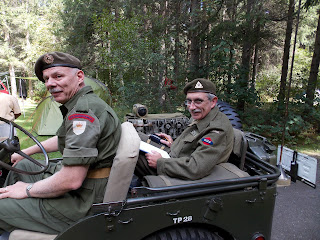 During the afternoon Chris VE3CBK and Dave VA3ORP changed into WW2 battledress and fired up their No. 19 Radio Sets and a No. 48 Radio Set.  In due course a 1953 Willy's jeep arrived, including uniformed driver, and both Dave and Chris began their No. 19 Set mobile fun.  They managed to work Bob VA3QV on AM, Bobs very frst AM contact.  Both Dave and Chris spent the night in a 1942 army bell tent, and it didn't leak!

The bands were pretty crowded and occasionally we had a bit of interference from the large number of radios on the air at the same time.  However, with a little bit of juggling and changing bands we managed to all have fun.  I'll tell you though, that No. 19 Radio Set has a pretty wide signal.

Just before supper the sky started to turn a bit dark and it did manage to rain for about 10 minutes.  We had all decided to order pizza from Capilano Pizza in Kemptville before hand so Michael collected the money and sorted things out.  It was decided because of the weather and our large tarps everyone came and ate and spent the evening socializing on our site again.  Once again VA3ORP's portable bar arrived with the single malt. 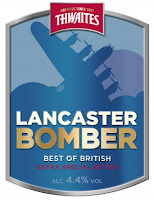 Saturday was September 15th, Battle of Britain Day, and the 72nd anniversary of it as well.  As VA3ORP is ex-RCAF, and I'm ex-RAF and RCAF, we toasted the occasion with a good British Beer, and an appropriate one as well, Thwaites "Lancaster Bomber" brewed in Lancashire.

Yes I know Lancaster's didn't take part in the Battle of Britain, but I did look for Spitfire or Hurricane Beer and couldn't find any.....so it had to do!  I'm sure the few of "The Few" who are still alive really wouldn't mind.

Saturday night was pretty cold and it did get down to +2C, and I for one had to get out of my sleeping bag around 0230L to add a pair of sweatpants and a fleece top in order to get warm.  I've already asked for a new sleeping bag for Christmas as the one I have is just a bit too old, but we survived.

It rained again for a few minutes Sunday morning, just before we started to take down the camp.  Of course that meant that the tarps got wet again and had to be packed away in that state.  Soon the radios were packed away, antennas dropped and rolled up, and the vehicles packed.  About 1130L we departed for a restaurant in Kemptville for a really good brunch, but I didn't write it's name down so I can't share it.  Then it was back onto Hwy 15 for the long drive back to Kingston.

This year's winner of the long distance award went to Eric VA3AMX who had a good CW QSO with a VK7 in Tasmania with 5 watts into a G5RV Junior.

Posted by Blogmaster at 17:03 4 comments: Links to this post

What a difference 24 hours makes!  Today was fantastic, mainly blue skies and a very comfortable temperature, and best of all no rain - either falling or in the forecast.

After breakfast at the Star Diner we left for Prince Edward Point Light, it's about an hour and a half drive from Kingston, including the 15 minute ferry ride at Glenora.  While it was a nice trip, it will be even better in a couple of weeks when the leaves start turning.

The lighthouse itself is well within the boundaries of the Prince Edward Point National Wildlife Area.  This national wildlife area is nearly 1400 square acres, and hosts many thousands of migratory birds each year.  Since the mid-1960s, this section of the Long Point Peninsula has been recognized as an important area for migratory birds and in 1996 was designated an important bird area.

The area is full of birds and the very few other people that we actually saw there all had $1000 cameras with huge lenses attached. 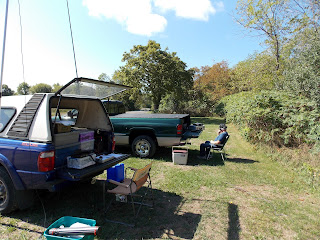 When we arrived at the parking lot we were the only people there and we had a great view out over the small harbour.  Because of the low water level most of the boats were high and dry.  The water was extremely shallow.

We set up two HF stations.  The rigs of choice were FT-857D's running 100w from batteries.  One station used a "Chilicon Special Mk2 Vertical", and the other a "Crappie Doublet" fed with 300 ohm twin lead.  Both antennas worked great and pulled in some good European DX.  Both stations were on the air by 1115L.

Twenty-Six contacts were made, and here is the breakdown:

Best contact of the day was with Charles - VE2LQ/qrp running SSB with 2.5 watts from St. Jean, Quebec.  Charles had a very weak signal, but we managed to pull him out of the mud and relay some traffic from him to Bill - VE2HG in Val d'Or, Quebec.

Of course on the way home we had to stop in at the Black River Cheese Factory and spend some money on the worlds best cheese.  I bought some aged onion and garlic cheddar, and always thinking of a good survival technique......a bag of home made dark fudge for the XYL!
Posted by Blogmaster at 20:08 1 comment: Links to this post

Late notice, but a number of operators are leaving after breakfast on Sunday, September 9th, to activate the Prince Edward Point Lighthouse - CAN788.  This lighthouse has not been activated for many years and is in a very sad state of repair.

This lighthouse is also known as Travers Point Lighthouse by the locals.  It was built in 1881, and due to its poor state of repair it was replaced in 1959 by a skeleton tower which remains active today.  The old building is still there but it looks very sad, but I guess if you were 131 years old you'd be looking mighty sad as well.

Callsign used will be VE3FRG.

We'll be listening, hope to work some of you.
Posted by Blogmaster at 12:20 No comments: Links to this post