Things have been pretty quiet around the VE3CLQ QTH for the past little while, and as a result the Blog has been quiet as well.

Two weeks ago the 80m OCF Dipole came crashing down in a wind storm after the wire snapped.  The winds that day were a steady 40 KPH with gusts up to 80 KPH, and that brought a lot of branches down as well.  Tim VA3TIC came over a couple of days later and helped me repair the antenna and get it back up in the air.  It was pretty gusty and cold that day as well, but up it went.

Twelve hours after it went back up in the air Tim left for Cuba for a 10 day holiday.....and the antenna came down again in another high wind storm.  This time I took it completely down and scrapped the old wire I had been using.  So it was off to Home Depot to pick up 50m of No. 10 wire and some stainless steel wire clamps.

So then we had the "mini-ice storm" here last Friday that did some major damage to my big trees.  The local arborist was called, and bless them, they were on scene within the hour on what must have been an extremely busy day for them.  Kingston had a lot of trees down that day.

Anyway, on Saturday, with the help of Tim VA3TIC...once again...the antenna is back up at about 50 feet, about 10 feet higher than it originally was, and working like a charm ready for this coming weekends Ontario QSO Party.....of course as I write this we are having another high wind storm here in Kingston, so we will have to see if it survives this time!

There are two new antennas going up shortly.  One is an Arrow Dual Band J-Pole which I used at the old QTH.  This antenna will be used for my new Packet Station.  At the same time my S9v31 31' Mk II multiband vertical antenna will also be going up at the far end of the property, next to the large fir tree.

And that's all the news that's fit to print!
Posted by Blogmaster at 11:27 3 comments: Links to this post 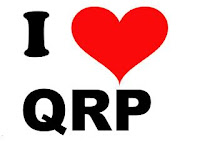 Good news on the 2013 version of QRP to the Field, they have changed the rules to finally include SSB.  Allowing SSB and the twinning of the event with SOTA will certainly bring in more QRP'ers and make for some interesting contacts.

I'm not sure where I'm going to operate from this year, a lot will depend on the weather and what sort of shelter I'll need.  My batteries are already on charge, and I just have to select which antenna I'll use.  I'm really excited to see SSB added to this contest.

Rules and dates for this years QRP to the Field can be found HERE.  Hope to work you on the day!
Posted by Blogmaster at 12:54 No comments: Links to this post