It was a pretty disappointing day yesterday on Amherst Island, the propagation Gods decided to have the day off !! 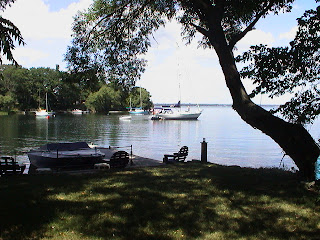 The weather was perfect, lots of sun, a nice breeze and the occasional cloud drifting by.  Ron, VE3GO, had arranged with friends of his to use their waterfront property to operate from, and what a beautiful spot to operate from it was.

My antenna of the day was a 31' homebrewed vertical into a 4:1 balun, and four 16' and two 31' radials.  Ron used an Outbacker mounted on a mag-mount on the back of his SUV.

The bands seemed to be working very short, and while we could hear a lot of European stations on 15m, we worked only two of them on CW: IK3VUT, Luca in Oderzo, Italy, and HB9TNW, Celso in St. Gallen, Switzerland.  Our third CW contact was with HI3IFE in the Dominican Republic, but I'm not sure if that is the correct callsign, copy was difficult.

The SSB side of the activation was not very good at all.....two contacts were made, both in Ontario.  First up was Russ, VE3FI, in Haliburton, who was testing out a new 80m vertical, and next up on 20m was Don, VE3MNE, at his cottage on Hay Bay. Both of course had booming signals.

No signals were heard from the Colorado 14er event at all, despite spending quite a bit of time listening for them.

While not the most successful activation we have ever done, it was a fantastic day really.  We wouldn't have asked for better hosts, the location was perfect, and we got to ignore the "Honey Do List" for another day.

I'm not one to make political statements, but having seen the mess these things left Wolfe Island in, I don't want to see this happen on Amherst Island. 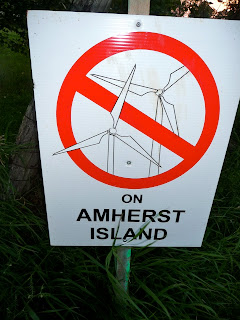