While I've been very happy with my 80m OCF Dipole I have here at the QTH, I have long thought that a second HF antenna would be a good thing to have as a back up.  After messing about with several designs, including a 31' vertical, a 66' vertical, and a copy of the same antenna that VA3QV has, it was interestingly that none of them would work very well.

Tim, VA3TIC, came over to the QTH and we decided to put up a 148' inverted L antenna.  Tim has this same antenna and it works very well for him.  It didn't work at all for me as it would not tune on any band anywhere.  So, we started to investigate.  Eventually we discovered that the 100' of coax I had on the antenna had a bad connector.  Once the connectors were re-soldered things worked just fine.  No doubt bad coax was the issue with the other antennas I put up as well.

The new antenna is on average about 2 S Units down from the 80 OCF Dipole, which is strange as the new antenna is higher than the OCF.   Other than that it works very well and I've been very successful getting into Europe and South America with it.  It was also responsible for my many west coast contacts on 15m during last weekends ARRL Sweepstakes Contest.

I'm pretty happy with it. 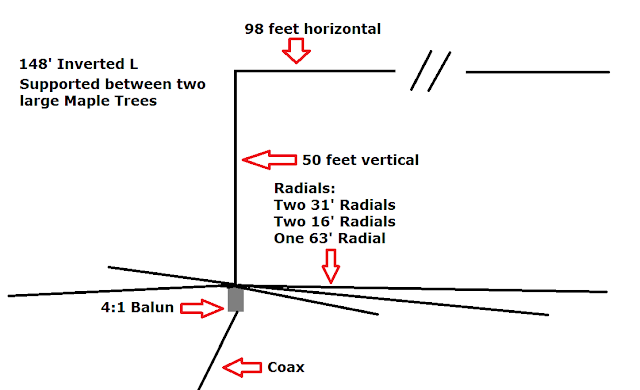