A package arrived at the VE3FI Shack today, a brand new JPC-12 portable antenna.  It's a great piece of kit, and I'm looking forward to using at soon as the ground in Eastern Canada has thawed out.

It is, here in Eastern Canada anyway, a three season antenna.  I doubt the ground spike would last very long being banged into the frozen ground at -30C around here.

The antenna is supposed to work on 40, 20, 17, 15, and 10m.  While I have not been able to test it yet myself, there are plenty of Youtube videos out there showing how it is used and its good performance.  It comes in a very nice case, and is built very solidly and looks and feels to be of a high quality.  My only issue is that it does not use the now standard 3/8x24 thread.  Instead it uses whatever thread the hams in China use - so I can not use my Buddipole parts and coils to "experiment" with it.

I will be the first to admit that the so-called "manual" is an absolute joke.  It's written in a form of quasi-English used by nobody in particular, on a deserted island, in the West Pacific.  It also has a few pages written in Chinese.  The first time I use it will be spent with my analyzer trying to figure out the coil and whip setting for the various bands....I have looked on line to see if anyone has already done this, but have found nothing.

Given the weather we are currently having here ( -35C here today ), it will be a while before I can get it out into the field and test it.

Here are some pictures of it in the case: 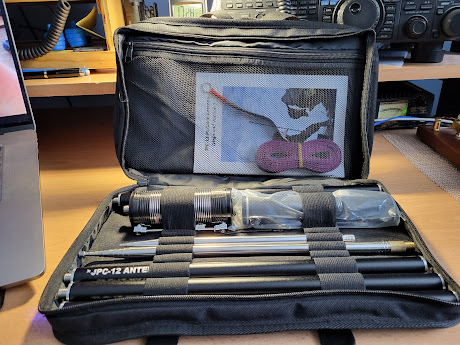 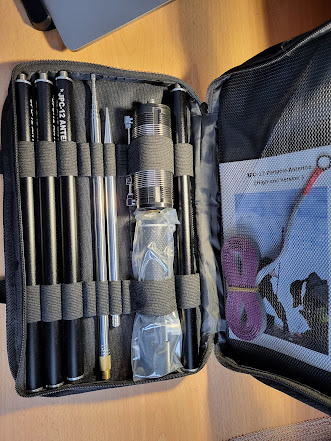 Until next time, Stay safe out there!!
Posted by Blogmaster at 22:20 1 comment:

A good weekend was had, but the weather could have been a lot better though as it snowed for most of it.  This year I did a combined POTA / WFD event, so I had the best of both worlds.  This was possible because the new WFD Executive has allowed a new class, that of "Mobile".

This allowed me, over the weekend, to go to seven different local POTA spots, setup, and take part in both POTA and WFD...and a good time was had!

I had originally made plans to take my 31' collapsible mast and a 40m EFHW antenna, but to be honest I don't think it would have stayed vertical with the wild wind we had.  So it was back to the old standby of hamsticks and a mag-mount.   My KX3 worked great, with no issues at all.

Was I happy with my results?  Not really, but given the fact I only operate QRP and use a severely compromised antenna system, I like to think I could certainly do better.  The other factor was the fact that while the propagation numbers looked good, in reality - not so much.  The numbers were: SFI=145. SN=76, A Index=9, and the K Index=2.   We also had a lot of deep QSB to contend with.

Operating in the back of my van at night causes some problems.  I like to stay as stealthy as I can at night, as you never know who's about, or what they are up too.  So I don't like using bright lights.  Last week I found a small, USB rechargeable light, it's supposed to be used to read a book in bed, but I used it to illuminate my log book so I could see to write.  It worked great, and it was pretty stealthy as it's not too bright.

All-in-all it was a good weekend, apart from the 37cm of snow we received that is. 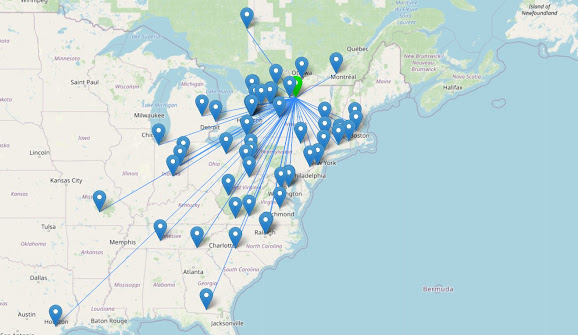 Stay Safe Out There!

Posted by Blogmaster at 15:08 No comments: 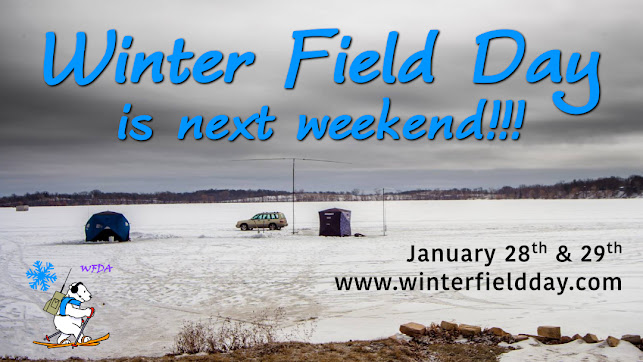 I had a few free minutes yesterday so I decided to run out and do a fast activation of Parrott's Bay, VE-5142, so I could at least take part in the Support Your Park winter event being held this weekend.
Weather wise it wan't a nice day.  The outside temperature was only -2C, but it was very damp out and the wind was pretty strong making it feel a lot colder.
It was great to see that for the first time in years both the SFI and the SN was above the 200 mark, almost ensuring a good day on the bands.  The days propagation numbers were: SFI=218, SN=204, A Index=6, and the K Index=2.
This weekend also has the NAQP SSB Contest taking place, lucky I got on the air, and completed the activation, before the wall of hungry contesters hit the airwaves.
I ended up with 30 contacts in the log in 25 minutes, using both 10m and 15m. This was the first time I have activated on those bands, and I was very pleased with how it went.  As usual I used my KX3 at 10w, and 10m and 15m hamsticks.
Here's todays contact map: 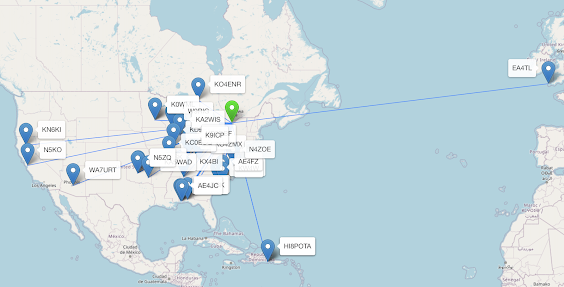 Stay safe out there!!
Posted by Blogmaster at 13:49 No comments:

An interesting package arrived in the mail today. It was addressed to me....but it had no return address on it, and even more mysterious was the fact there was not even a note inside the package. It arrived as a surprise and completely anonymous.

So, what was in the package you ask?  Well, that's where it gets interesting. It was a 1878 Jerome Redding & Company CW set. The set comprises of a full-sized camel back brass key on a jappened base and a sounder. It's stamped with the Jerome Redding & Co mark, and a resistance rating of 4 ohms. So it was designed for use with a single 1.5 volt cell.

Here is the drawing of it in the 1880 company catalogue: 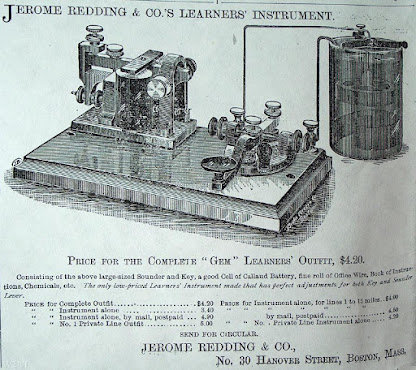 And.....here are pictures of the actual machine on my desk today: 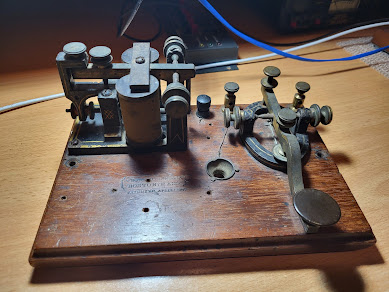 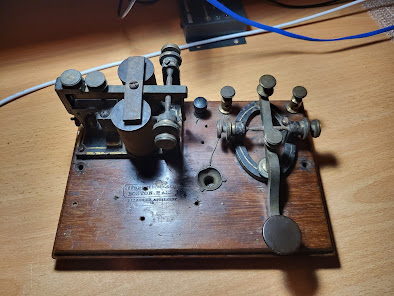 As I stated above, I have no idea who sent this to me, but Thank You Very Much!!!!  This will be the centrepiece of my key collection.

Posted by Blogmaster at 21:02 No comments:

As I did this time last year, I have started to think about making some radio plans for this year.  I think it’s safe enough to travel these days, as long as you play it safe around crowds…..which I don’t plan to be in or near.  Just like last year, my main plan this year is to simply survive without catching anything nasty! 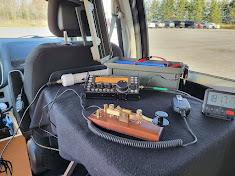 So far this year, apart from a few cold days, we really have not had the bitter cold winter we normally get.  I’m sure this will change as we roll further into January and February, but for now I’m enjoying the heat wave of +2C.  I should mention that it hasn’t been cold, but it has been very damp which is worse in my book.

Given the current price of gas (petrol) here I really shouldn’t be making any long distance travel plans as the prices are expected to rise even further….a lot!  But, in the end it’s only money.

So with this in mind I have resurrected some plans I made last year for a few POTA micro-DXpeditions.  At this point in time, I’m pretty certain my big trip out to the west coast isn’t going to happen (even though it’s planned down the last detail) so I will replace it with several short duration camping and radio trips.

The first trip I have planned is down to Point Pelee in South-West Ontario, and return home along the lakes, activating the many POTA locations as I pass them.  That one will be a 5- day trip with each night at a different park.

The second one that I also had planned for last year, will be a trip to Penetanguishene and around the Georgian Bay POTA parks to Tobermory. That one will be a 4-day trip, and once again each night will be at a different park.

The "pre-pre-planning" for both Field Days, winter & summer, has already started, and plans are in the works for the W/VE Island QSO Party and the International Lighthouse Weekend both held in August.  Chillycon is also on my agenda for September.

Stay safe out there!!

Posted by Blogmaster at 18:33 No comments:

2022 leaves us in a few hours, and to be honest, it really wasn't that bad....it did fly by though.  There seems to be truth in the saying the the older you get the quicker time goes by.
Once again the family and I have been very lucky, none of us have been sick, and all of us have been able to get our shots and boosters on time with no issues.  Thankfully, all of my friends have also been lucky and escaped the covid plague.  Let's hope that this Covid mess is now behind us and we can start to get back to normal..

I have had an exceptional year with amateur radio, Starting on January 1st of this year I have made at least one QRP contact every day, and not a day has been missed.  In fact I have put 4000 QRP contacts in my log this year, and yes, I'm still hearing that "QRP doesn't work"........yeah, and I have still a unicorn for sale to the highest bidder.  As I did last year, all my POTA activations have been done with my KX3.

I have activated 180 parks in the POTA program, which is more than last year.  I wonder if I can keep that pace up in 2023?

At the start of last year I was determined to get on the air using CW.  My Dad, VE7CVQ (SK) was a CW fanatic.  So.....I'm pretty pleased to tell you that this year I have made and completed 457 CW QSO's, and I'm really, really pleased with that.

Plans for next year...there are several POTA mini-DXpeditions planned to different parts of the province, as well as the long delayed trip out west to see family.  The western trip was supposed to happen two years ago, but obviously didn't happen.

I hope everyone has a very Happy New Year, and that you all stay safe.

Last POTA of the Year...

What a beautiful day it was here at the QTH.  Blue skies and +6C, and not a drop of wind......far too good weather to sit around at home, so off I went.

Today was two activations for the price of one.  Recently they added VE-6003 The Great Lakes Waterfront Recreational Trail, and by chance this trail intersects a good number of local POTA sites.  So I had both VE-5151 and VE-6003 up on the air at the same time today.

It wasn't a good day for DX, in fact there wasn't any.  Furthest contact today was with Ron WD5CSK, in Oklahoma.

Antenna today was my 28.5' vertical and 17' ground radial, held up with my SOTABEAMS tactical mini-mast.  Radio was my KX3 at 10 watts.

Propagation looks to be dropping in the toilet for the next two days, so this looks like this was my last activation of the year. 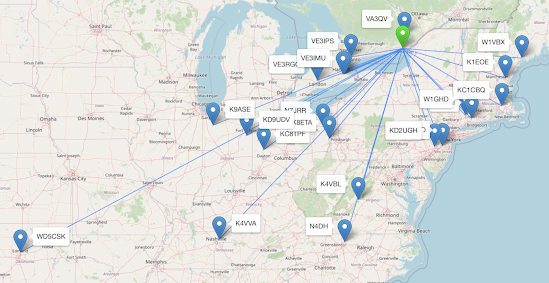