It's Monday evening and I'm just recovering from this years field day.......I even took the day off of work !!

I left for the Hay Bay site early Friday morning with the new guy, Mark - VE3EOG in tow.....for his first field day experience.  This was the seventh year we have used the Hay Bay site, thanks to Don - VE3MNE, who owns the outstanding spot. 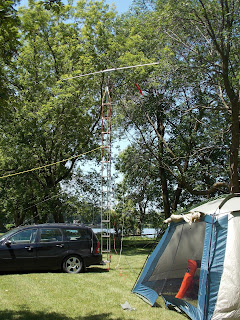 Friday was spent getting the antennas out of storage, the cobweb's blown off them and getting them back up in the air.  This year we used one 160m OCF Dipole, two 80m OCF Dipoles, two 31' verticals, and a single 44' doublet......as well as a tri-bander on a 20' section of tower, mounted on the back of Tim's station wagon.

This year as in the past, we planned on operating as a 5A operation, four SSB and a digital station, and of course this means setting up operating places for them.  Lucky for us we had enough screen tents for everyone to use.  And every one of them had a million dollar view of the Bay.

By late afternoon we had everyone set up and some of the initial radio checks carried out.  As is our tradition we cleaned up and drove via the Glenora Ferry to the village of Wellington in Prince Edward County for a relaxing dinner and a couple of cold ones.

Saturday dawned dark and overcast, and we knew we would be in for some rain later in the day, so the race was on to get everything finished and the screen tents tarped over for protection. 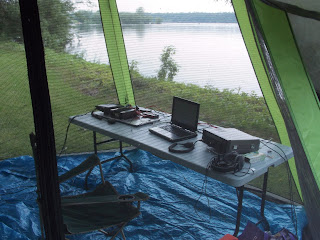 Field day kicked off at 1400 local to a lot of confusion of the new Ontario Sections. Most of the US stations were logging us as Ontario, not Ontario East.  Even after we explained the situation to them they continued to log us as simply Ontario.  Oh well, at least our logbook is correct.

For our U.S. friends, there is no longer a Section in Canada called "Ontario".  Instead we have been split into four individual sections, Ontario East, Ontario South, Ontario North, and Greater Toronto Area.  Hopefully next year this issue will have sorted itself out.

Ron-VE3GO came out very early Sunday morning and spent the day operating CW for us.  The CW station filled in some missing gaps in our state and province count.  In the end we only missed having contacts in Wyoming and Manitoba.

The weekend went quickly and before we knew it field day was over.  We ended up with 1156 contacts, including a DX contact to Jamaica on 6m.

Thanks to Don VE3MNE for hosting the weekend.
Posted by Blogmaster at 21:30 No comments: Links to this post

What a great weekend we had for the 2013 Rideau Lakes Cycle Tour.  Saturday was cool and cloudy with a little bit of rain late in the day, and Sunday was a glorious sunny day. 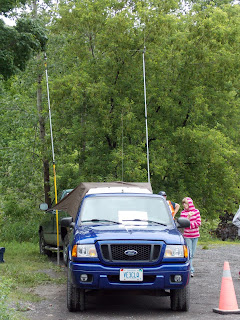 Don, VE3MNE, and myself operated two VHF stations from the parking lot of the Perth Road Village General Store.  We arrived on site at 1000 Local, and setup our equipment.  One station acted as Net Control for the Frontenac Section of the tour, and the other is a liaison station with Net Control for the Perth Section located in Westport.

We had issues both days getting into the Christie Lake repeater, VA3TEL.  Normally we can hit it from anywhere in Perth Road Village with a 5/8 mag-mount, but not this weekend.  In the end a 22' mast with a 2m antenna lashed to the top did the job, and even then conditions deteriorated over the course of the day to the point we had to shut down the liaison radio.

On Saturday the first rider came through Perth Road Village at 1123 local, and after that it was a steady stream of riders and support vehicles until we closed things down at 1700 local.  This is an hour and a half earlier than any of the past 7 years we have provided communications support to the tour.

Thanks to Tim, VA3TIC, for paying us a visit and delivering Timmies coffee to us.

We dealt with two accidents on Saturday, both minor. Thanks to the drivers of the support vans things were looked after very quickly.

Sunday started real early at my house.....0400 Local !!  After loading a freshly charged battery into the back of my truck, it was off to pick up Roy, VE3VJF, and then a slow drive back up to the village.  It was a slow drive due to heavy ground fog and lots of deer on the road.

After setting up the antennas and radios it was just a matter of sitting around and waiting for the riders to come by heading home to Perth and Ottawa.

The first rider left Queen's University at 0500 Local, and came screaming by us, without stopping, at 0626 Local.  Many of the riders did not stop at the General Store on the way home this year, those that did enjoyed some cold water, clean toilets, and lots of grass to lay about on in the warm sun.

It was 1100 Local when the last rider left the village and we closed down the net.  We passed Net Control off to Westport and the boys of the Lanark-North Leeds ARES Group.

As usual this was a great weekend and lots of fun to do.  It's really great practice for ARES and Emcomm groups, it allows us to deploy to locations we don't normally operate from, and it gets us to pass real message traffic that actually means something, not just the usual fake exercise traffic.

After it was all over it was off back down Hwy 10 to the Star Diner in Kingston for a very late breakfast, and around the table the planning for next years operation was begun.

A huge THANK-YOU goes out to the owners, and extended family, of the Perth Road Village General Store for their great support of the Bike Tour.  We look forward every year to see their smiling faces, and the communications team appreciates very much what they do for us over the weekend...........and they have the best coffee !!!!!!

Posted by Blogmaster at 17:09 No comments: Links to this post