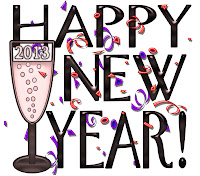 Happy New Year to everyone!!

Mary and I hope you all have much happiness and a fantastic 2013.

Posted by Blogmaster at 22:19 2 comments: Links to this post 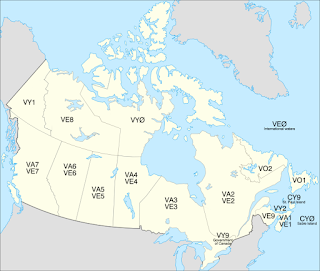 The RAC Winter Contest is over for another year, and once again it was a real blast.  I managed to work every RAC station, including VE8RAC in Yellowknife.  In fact I got some RAC stations on three bands,

The only spot in Canada I did not make a contact with was Nunavut (their only local ham had gone south for the winter!).

The band conditions were excellent for nearly the whole 24 hour period, and many good contacts were made with VE7's.  I even managed to make a number of VE7 and VE6 contacts on 10m during the afternoon.

Not many VE9, VY2, or VE2 stations were heard, but I managed to make at least two contacts in each of those provinces, it took a lot of time to do that though.  The other interesting thing was the number of non-Canadian stations taking part.  I heard many Europeans in there looking for points.

It always amazes me what a different type of contest the Winter Contest is.  It's very nice to hear operators taking time out, in the middle of a pile up, to say a few nice words with an old friend, and even new friends.

The highlight of the contest, for me, was having my very first QSO with a station in Yukon.  I've never heard a VY1 station before.  I'm not sure if it was the propagation of the day, or my new antenna doing the work for me.  Whatever it was I'm a happy camper!
Posted by Blogmaster at 14:09 No comments: Links to this post 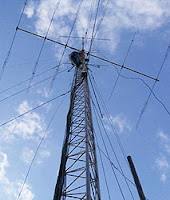 This is always a good contest to enter, it's not as fast paced as others, and everyone seems to stop and have a good QSO instead of just a quick "59 Ontario".  It's also a very good way of collecting all the provinces and territories in a single day.

The contest rules can be found HERE.  Hope to work you all during the contest.
Posted by Blogmaster at 11:41 No comments: Links to this post

It's -17C here in Kingston this morning with the wind factored in, lots of snow too!  The wind is 30 gusting to 50 KPH.

We had an inpromptu net this morning while everyone "attempted" to get to work.  None of the roads here in Kingston had been plowed, and the commute to work was a nightmare for some.

The prize for the most determined to get to work goes to Don-VE3MNE, who walked four Kms through knee high snow to get there, he was sure blowing into his HT mic by the time he got there.

I can't imagine what Bob VA3QV in Ottawa has got over the last 14 hours, I can't wait to read his Blog report on the storm. I'm sure they got hammered more than we did.

It looks like it's going to be an indoor radio day.....chasing DX.


Posted by Blogmaster at 08:53 No comments: Links to this post

The weather may be getting bad in some parts of the country, and just to make Bob VA3QV feel better, it's snowing in Kingston today.

However, as bad as the weather may be some hams are still planning island and lighthouse activations, and there are a couple of activations coming up soon.  Please check out: http://ve3.blogspot.ca/  and see who is activating what, and where.

These guys are taking all the risks by being out there in all weather, so let's get on the air and support these guys, it's the least we can do for them.
Posted by Blogmaster at 12:01 No comments: Links to this post

Well the unpacking continues here at the new QTH.....and isn't it amazing what you find in boxes!!  So far I've found a small 4 channel Motorolla 2m radio I didn't know I had, and I found a set of keys that I lost 6 years ago, of course now I can't find the locks they fit!

The new antennas are working very well.  My signal reports from stations I talk to on a regular basis are amazed at the difference from the old antenna to this new one.  I can't wait to give it a really good workout during the RAC winter contest on December 29th.

The weather here in Kingston has been rain, followed by more rain, and believe it or not....there's more rain in the forecast.  Not a drop of snow has fallen.................so far.  We do have snow in the forecast for this Saturday, but it's still too warm, and I don't think that will drop enough by this weekend to give us any snow.

Christmas preparations are underway, the tree is up, and the Christmas baking are making the QTH smell spectacular.

Posted by Blogmaster at 11:43 No comments: Links to this post

The bands are not in the best of shape this weekend, but the ARRL 10m Contest is on so I thought I'd try and catch a few contacts to see how the new HF antenna is working....and it seems to be working well.  I do know that I'm going to have to put up a dedicated 15m dipole as the 80m OCF will not tune 15m at all, it just doesn't like it.

So far I'm working a lot of mid-west and west coast stations as well as many South Americans. BUT.....I did manage to snatch 5T0SP out of thin air last night on 20m, after many days of trying, and got him on the first call...which made my evening.

There does not seem to be very many European stations on the air at the moment, at least if they are I'm not hearing them.

The next big test will be the RAC Winter Contest on December 29th.  Hopefully all the bugs will be out of the station and antennas by then.

Posted by Blogmaster at 12:06 2 comments: Links to this post

Well, the antennas are up in the air, the VHF rig is in the house and I've already ran some radio checks with it......but the furniture doesn't arrive till early tomorrow morning.

Thanks to Don VE3MNE, Tim VA3TIC and Derek VE3HRW for coming out and getting the antennas up.

I have my HF rigs stored at Don VE3MNE's QTH in order to protect them from being thrown around by the movers.  They'll be back home with me by tomorrow evening, and I'll be on the air 10 minutes after I arrive get home with them.

It's been an interesting few days living out of a suitcase while waiting for things to come together, but I will be really glad to get back into my own bed and get life back to normal.

I guess over the next few weeks we'll see how the new antennas perform, stay tuned for the reports.
Posted by Blogmaster at 20:46 1 comment: Links to this post