By now most of you will have read, or heard, of the kerfuffle going on between RAC and the Emergency Communications Ontario Association (ECOA). 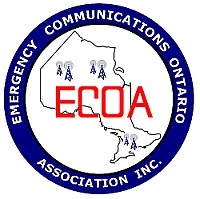 I must point out that gaining access to RAC insurance was not the only reason ECOA was formed.  They have managed to bring together, in a remarkably short time period, many emergency organizations in Ontario, such as the Salvation Army, Red Cross, and the St. John Ambulance.  In fact if you look at who ECOA's Directors are you will note that they come from these organizations, including a Director appointed from the EMO.  What a great thing to see, the very people who will need our emergency communications support serving as directors.  Ever see that happen in RAC?

Anyway, you've probably guessed by now that RAC has thrown a hissy fit and has refused to accept ECOA as an affiliate, and has refused them insurance coverage as well. Nice one eh? And here I thought RAC was supposed to be encouraging new membership!

Just think about how many clubs across this country are not incorporated
and therefore not able to be a "RAC affiliated club" and therefore are
not eligible to have club insurance? Incorporation costs money and a
lot of clubs can't afford it, nor do they have the membership base to
support it. What about them? Why are they being disenfranchised?

How many hams are members of clubs who are not RAC affiliated clubs and
are now not eligible to have RAC insurance coverage? The other side of
the coin is not every ham wishes to belong to a club, affiliated or not,
so why should they be penalized?

In my ARES District we have four ARES groups. Two of those groups are
not incorporated, and are no longer eligible to get RAC insurance either
for their group or for their individual members. Is it fair to ask ARES members to react to an emergency, yet allow RAC to deny them insurance coverage to do so?

The big question here is does RAC have a legal duty to protect us when we are called out?  If they have already authorised the formation of an ARES group, and that group is not incorporated.....as that is not a requirement to form a new group, surely we should be grandfathered under the new rules?  Because let me tell you, if I'm called out and I get injured, the first two people I intend to sue is the President of RAC and the VP Field Services for voting to deny me RAC insurance coverage, even though I'm operating in a RAC authorized ARES group.

RAC touts itself as the "Canadian National Organization" and that it "represents Canadian amateurs".  It doesn't.  RAC actually represents ALL Canadian amateurs, RAC members or not, and if it will not do that, or accept that fact, then they cannot be the national representative for amateur radio in this country.  Think about it - you represent everyone or nobody, you can't pick or chose - does Industry Canada only ask them questions about hams who are RAC members, or are the actual issues being discussed of national interest and ones that effect every ham in this country?

RAC needs to get its collective head out of its ass and get with the program.  Because sooner or later a group of hams will get together and decide enough is enough, and form a new national association, that WILL represent ALL Canadian amateurs........what a novel thought!
Posted by Blogmaster at 17:51 1 comment: Links to this post

I can't believe how small it is, and it makes you wonder just how small radio can eventually go!

I'm looking forward to experimenting with it over the next few weeks and getting my CW up to speed.

Now I can take it to work and operate at lunch time daily from Fort Henry Hill using my Buddipole system.  This is going to be a good summer.
Posted by Blogmaster at 21:12 4 comments: Links to this post

As per the usual for this weekend, Don-VE3MNE and myself headed out for our annual IARU HF World Championship weekend to Don's cottage on Hay Bay.  This year Tim-VA3TIC joined us for a weekend filled with the anticipation of excellent DX.

The bands seemed to be very long with stations from Europe coming in at 20 over 9, but they could not hear us answering their CQ's - on any band, using any of the four available antennas.  We all thought it was going to be a very long weekend when I answered a CQ from Steve-VK6IR in Western Australia and had an almost instant response.  The bands settled down after about 30 minutes and we made lots of DX contacts.

Overall it was a great weekend, and the weather was fantastic.  However, some of the behaviour on the bands could have been a hell of a lot better.  I started to wonder if some of the clowns we heard had ever operated a HF radio before!

Why is is when a station calls for the "VE3 only" every "W4" or "N9" in creation decides that the calling station actually meant them and not the VE3?  Some of these guys need Elmers in the worse way!

What's with the stations calling "QRZ" over and over and over without ever giving their callsign?  In the end I started to work one of these stations just to see if I could actually get his callsign out of him.....and it took 20 minutes to do so.  Elmers anyone????

What's with these clowns who sit on a frequency and tell you that it's in use, when clearly it isn't?  This happened to me at just as lunch was called on Saturday.  I left the radio on that frequency while I ate lunch and heard nothing for the next 30 minutes.  I went back called CQ and was told the frequency was in use.  In the end I asked the guy how much he had paid for that particular frequency as I'd like to buy one as well!

And finally, what's with giving your callsign at mach 6, so a normal human being could never understand anything you had just said.  Then why do they leave a few milli-seconds in between their CQ's so that stations do not have enough time to get their callsign in?  IO4HQ was an excellent example this weekend on how "not to call CQ".

Last contact of the weekend?  0750L Sunday morning I heard 8N8FQ, the HQ Station for the JARL calling CQ....and got him on one call back to him.  Made my day!

I worked just about every national HQ station I could hear, but I never heard a RAC station on the bands taking part.  Does anyone know if they did?

The IARU contest is an excellent way of working all the DX you can handle in a weekend, we never miss it, and we all had a blast!

Many thanks to the ARRL for running this event for amateurs around the world on behalf of the IARU.
Posted by Blogmaster at 20:45 No comments: Links to this post

Thursday evening at 2000L I started scanning 40m for the start of the 2011 RAC Canada Day Contest.  First in the log was Greg-VA3KUG from Midland.  For the rest of the evening I bounced between 40m and 80m logging mainly Ontario stations.

In recent past year the start of the Canada Day Contest aways yielded a feast of VE1's, VE9's, VO2' and VY2's.  Not this year.  Thursday night brought very slim pickin's.  I did manage to log Jean-Pierre-VA3SG, Polar Bear No. 121, an unusual sight on SSB.  J-P is normally on CW.....but with global warming the bears must be heading into new territory J

Saturday morning came pretty early and I drove out to the cottage of VE3MNE at Hay Bay, to use the same antennas we used for Field Day, namely the 160m and 80m OCF dipoles.  It's amazing how quiet those antennas are compared to my dipoles at home.

Both 40m and 20m started the day very long, and I had no problems getting contacts into the Maritimes and out to BC.  In fact all the provinces we had trouble making contact with on Field Day kept popping up all over the place!  How typical!

15m was a pretty big disappointment.  It never really opened all day.  I did make about 10 contacts there, but I worked hard for every one.  15m was also the only band I heard VA3RAC, and of course they never heard me answering them.

I made a good, solid, contact with Martin-JW/DG5NFF in Svalbard...which is an archipelago in the arctic, constituting the northernmost part of Norway.  Bless him, he was even calling "CQ Canada Day"!!

Other DX for the day included the UK, Poland, Rumania and Spain.  However, the best catch of the day was Jose-KP4EIT in Ciales, Puerto Rico, who I caught on 6m mid-afternoon.

I ended up with only 75 contacts, but to make up for that I had a great day in the country, lots of sun and beautiful scenary.  Next year will be better.......right?
Posted by Blogmaster at 15:54 No comments: Links to this post