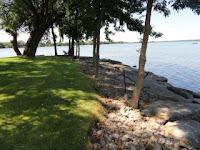 I'm always looking for a good island to activate and I was very surprised to find four of them near Kingston that have never been activated before at all.

All four of these islands are located in Hay Bay, 20 Km south of the town of Napanee.  Right now we're trying to figure out good dates and who is available, and work shifts.....and of course the weather.   Hopefully we will get to them soon.
Posted by Blogmaster at 16:00 No comments: Links to this post

This years W/VE Island QSO Party is this coming Saturday, August 29th.  The rules for this event can be found HERE. 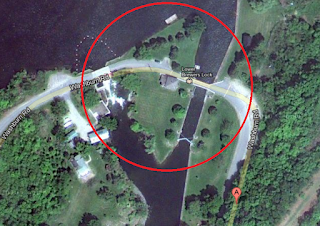 I would like to be on the air for a lot longer, but that day is my mother-in-laws surprise 80th birthday party, and it's more than my life is worth to miss it.......if you know what I mean !!

This is only the second activation of Washburn Island so it's still pretty rare with the island collectors.

Radio will be the FT-857D with a vertical Buddipole on various bands, depending on the days propagation.

This is a busy place during the summer with boats coming and going and herds of kids fishing from the docks.  I know I will have no room to put up a dipole without somebody complaining, so the Buddipole on an 8' mast will have to do.  I'll probably start on 20m and give 40m a chance later on.

At the moment they're forecasting rain for the day, so hopefully the weather Gods will decide to smile on us and give us some sunshine instead.


Posted by Blogmaster at 20:58 No comments: Links to this post

I was up before the crack of dawn today and with the truck loaded last night, it was off to Prince Edward County to activate Point Petre Lighthouse (CAN-026) for the ILLW.

To get to Point Petre we had to travel about 60 Km west to the Glenora Ferry, where I met up with Don-VE3MNE, and the ferry over the narrows to the town of Picton.  If you've never been to Picton you have to go, it's a beautiful and busy little town.

Once in Picton we had arranged to meet Bill- VA3WOW, from Belleville, for breakfast at the Lighthouse Restaurant.  We hadn't seen Bill since the Bicycle Tour last June, so it was good to catch up on things.

What a great day!!  It was horizon to horizon blue sky and the temperature in Prince Edward County was close to 29C by 1000 local.  However......isn't there always a "however"?  The propagation numbers today were terrible.  At 0600 the numbers were SFI=88,  SN=46, A Index=44, and K Index=5.  Twelve hours later those numbers have not improved very much at all, and in fact we have had a moderate (G2) to strong (G3) geomagnetic storm.

So given the above propagation news, I'm delighted to say that I managed to work a grand total of seven stations, including three lighthouses, all on 20m, and they were:

While I worked 20m, Don-VE3MNE, tried the other bands starting with 40m and working his way down to 10m.  Nothing was open at all, only 20m.  There was very deep QSB on 20m, signals would be an S9+ one second and a S1- the very next.  It was an extremely hard time copying some of these stations.

Antenna of the day was a 20m Buddipole vertical up at 12', and the radio was my FT-857D which after extensive bench work, has decided to return to life and live another day!

I should also mention that if you ever decide to activate CAN-026 on a very sunny day......take a shade tent, as there is no shade and no big trees nearby to operate under.
Posted by Blogmaster at 18:08 No comments: Links to this post 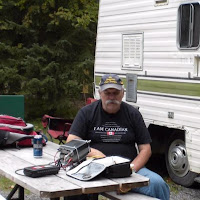 Pssst.........have you been following Bob?  He's been pretty quiet lately, his XYL has a very tight grip on him.  This grip is so tight I'm convinced he's been up to no good and Liz has finally caught up with him!! J

Want to know what he's getting up to these days? here's a new link on his up-coming QRP Mini-DXpedition...HERE.

A lot of the islands he's planning on activating have not been activated in a long time according to the records we can find, so let's get on the air and support him on this mini-dxpedition.

Hopefully we can get him out to another island for the W/VE Island QSO Party on August 29th.


Posted by Blogmaster at 11:25 No comments: Links to this post 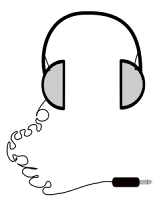 Coming up next weekend is the North American QSO Party and the International Lighthouse and Lightship Weekend, and the local plans are already well under way for those two events.  Luckily this year they basically overlap, so we get "two for the price of one".

The long range weather forecast looks good for next weekend, and if the propagation improves a bit we should have a great time.

Make some plans and get outside, enjoy the weather, and operate a radio!


Posted by Blogmaster at 10:36 No comments: Links to this post

I just came across this article on another website.  Cheating during a ham radio contest......REALLY??  You have to win that certificate for your wall so badly you have to pad out your log book??

Those of us who contest on a regular basis know just how hard it can be at times, especially when the propagation is not so good and that much needed multiplier just does't hear you, but hears everyone around you.

Yep, it's frustrating, and it's difficult to compete when you can't have a beam and only have wires up in the air.  But I can't imagine padding out my logbook with fake calls just for the thrill of "winning"......what the hell have you won??    Read on, there wasn't just one of them......there was over 50 (!!!!) of them that got caught, and more importantly, which isn't discussed, how long has this been going on??!!

Well done to CQ Magazine for making this public.  I only hope that they name and shame these idiots!!  Here's the article from CQ Magazine:

“The CQ World Wide DX Contest Committee is making a concerted effort to crack down on cheating.

After disqualifying more than 50 logs from the 2014 contest and banning one station from competing for the next five years due to alleged “log padding” – or adding contacts that were never made – the committee said it would test new software designed to detect the practice by running it on all logs submitted in the past four years.

Any logs that show evidence of adding unverifiable QSOs will be dealt with on a case-by-case basis, according to a post on the CQWW blog by Contest Director Randy Thompson, K5ZD. See August CQ‘s “Contesting” column for an in-depth discussion of honesty and cheating in contesting.”

Hopefully this will now get the ARRL to start checking their past log entries a lot closer. Because you know if they have been cheating on CQ Contests and getting away with it, they have to be cheating on ARRL contests!!

I guess the question is will CQ give the ARRL the names and callsigns so the ARRL can check them out as well, and if found to have cheated......will the ARRL ban them as well ??

The bottom line here is that there are hams out there who worked hard, won a contest fair and square, and have been denied their moment in the spotlight.  I hope the results in the affected contests are being recalculated to correct this.
Posted by Blogmaster at 09:33 No comments: Links to this post

Sunday on the air

It was a beautiful day here in Eastern Ontario yesterday, the temps got up to 29C under a brilliant blue sky.  Don, VE3MNE, and I drove out to Hay Bay, our Field Day site which is 50 km west of Kingston, and used the antennas we keep set up out there.  I used the 160m OCF Dipole which is sitting up at about 90' with a north - south orientation.  Radio in use yesterday was my IC-718, which performed very well considering I'm still figuring things out on it.

As suspected the propagation wasn't the best for the Colorado 14er event and the only SOTA contact I made all day was in Utah !!  Ryan, K7ODX, was activating W7U/SU-019, which in English is Monroe Peak in South Utah,  a 3422m high peak and worth 10 points to we chasers.  It was a rough contact as Ryan was only a 41 at very best.

Next up was Earnest, J69Z/p in St. Lucia, judging by the background noise he was operating from the beach, but was a very solid S9 into Hay Bay.  There were many US and Canadian stations in the log over the course of the day, and it was amazing how many of them commented on the poor band conditions they were having.......I was having a blast making the contacts I got.  Many of the US stations were running kilowatts, and given the very sad state of their signals I presume they were operating into less than optimal antenna systems. In fact there was one US station, a K0, that was running so much power he was splattering over half the 17m band, and didn't take too kindly to being told that.

Whatever happened to the days when hams cared about what their signals sounded like?  A number of stations told the K0 what their panadaptors were seeing with his signal, and all they received in return was a "yeah, so what, it's the way I run my rig".  Oh well..........you can't fix stupid.

At 1844 UTC I heard 9K2NO on 20m at about S9+40.  He was working all sorts of Europeans but very few North Americans.  I tried for about 15 minutes, but it was a waste of time as I just could not get a signal that could be heard into Kuwait.   My last contact of the day was with GD6IA, Alex, on the Isle of Man.  I had a great rag chew with him about my memories as a small boy of the TT Motorcycle Races that take place annually on the Island.

As I cleared with Alex the dark clouds started to form up over us and we packed up, had a fast BBQ supper and then high-tailed it home.  The heavens opened just as I was unloading the truck in the garage.....perfect timing.

It was a good day.  Great weather for the majority of it, good contacts, and good food.  I'm looking forward to the next adventure on the weekend of August 15/16, which is both the NAQP and the ILLW weekend........the batteries are on charge!


Posted by Blogmaster at 11:07 No comments: Links to this post