Sunday morning was pretty gloomy with clouds and rain in the forecast, but it wasn't that cold.  Eight of us met at the Parrotts Bay Picnic area on Hwy 33, just west of Amherstview, and set up our rigs and operated portable HF for 3.5 hours.

The Parrotts Bay picnic site is a very nice spot to operate. It's clean, has portable washrooms, and lots of space for parking. The bay is filling up with ducks as they get ready to move south for the winter, and while the water must be cooling down by now, there were some kayakers out on the bay taking in the start of the fall colours. 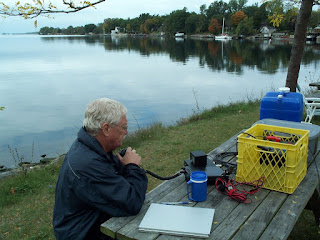 Don, VE3MNE, and I tried 20m at first, but it was full of RTTY traffic taking part in the CQ RTTY Worldwide Contest.  They were all over the band, so we quickly moved up to 40m were things were a little slower.

The Texas QSO Party was also on, but all our attempts to make contact with stations in Texas fell on deaf ears.  I guess our 50 watts just was not making it down there to that part of North America.

Martin VA3AKY, Carl VE3DNR, and Dave VA3ORP worked on getting Martin's 20m dipole working.  It had been cut incorrectly and needed a major operation to get it tuned up and on the air. 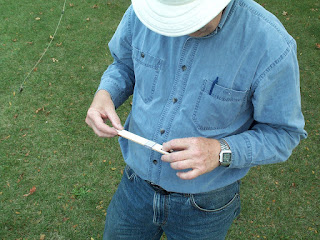 Dave, who's into the No. 19 Radio Sets, got out his slide rule to figure the measurements out.....I haven't seen one of those things in....dare I say it....40 years!  Anyway, it did the job and Martin was soon up and running, making contacts.

Dave made a few 80m contacts with his "Blue Pill" vertical antenna, including checking into Ontars with a stunning 5 watts on his FT-817.  QRP Rules!

Bill, VA3WOW, our DEC for Loyalist ARES District also drove from Belleville to join us for the morning.  He also helped in the antenna reconstruction, and we had a good chat about "all things ARES". 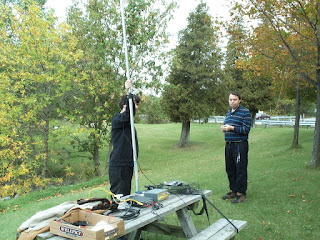 As I normally use my Buddipole in the vertical mode, I recently bought three extra kite winders from Buddipole in California to use for my radials.  That brings my "collection" of them to five, so I've decided that I am going to cut some radials - 2 per band - and have a single kite winder for each length ready to go in my go-box.  I think this will cut down on the messing around measuring out the radials using my current system.....we'll see how it goes anyway.

All in all, it was a very pleasant fall day to be outside in the fresh air playing radio.
Posted by Blogmaster at 21:49 3 comments: Links to this post

I hope that most of you who read this Blog now know of that Industry Canada authorized commercial interests the use of a 2m simplex frequency over the September 10-12 weekend.  This was for an international cycling event being held in both Quebec City and Montreal.

The bulletin issued by RAC is below:


Industry Canada advised both RAC and RAQI on Friday, Sept 10, 2010 that their Montreal office had authorized a number of 430 to 450 MHz frequencies and a single VHF frequency on 145.555 mHz. According to IC, frequencies were chosen to avoid known amateur repeater channels. These frequencies in the 70 cm and 2m amateur bands were temporarily authorized to support communications for many European entrants of a cycling event to be held on Quebec City and Montreal on Sept 10 and Sept 12 respectively. This type of authorized intrusion by Industry Canada of non-amateur communications in amateur spectrum is highly unusual and is a matter of great concern to Radio Amateurs of Canada. RAC will be taking the matter up with Industry Canada officials. RAC will be interested in knowing if actual interference has been caused to amateur communications; please report any observations to regulatory@rac.ca

What has RAC done about this?  So far the silence from them has been deafening!  Canadian hams have a right to know what is being done to ensure this type of activity never happens again!  If RAC has not filed a complaint then Industry Canada will take it for granted that they can do this again and again.

Tonight I sent an email to Norm Rashleigh, the RAC VP for Industrial Liaison, asking him what action RAC had taken.  That email is below:

Has RAC filed a formal complaint with the ITU over Industry Canada allowing commercial activity on the 2m band?

Has RAC formally asked IC why they permitted this intrusion, in violation of our international agreements? I would like to remind you that this intrusion, so very close to the border, will also have affected our American ham friends. It will be interesting to see what response comes from the ARRL.

I most sincerely hope that RAC has done something over this issue!!

For those of you who wish to ask Norm questions on this intrusion, he can be reached at VE3LC@rac.ca

I'll post any response I receive from Norm, here on the blog.

UPDATE   As of September 28th there has been no response to my email to Norm Rashleigh, the RAC VP for Industrial Liaison, regarding RAC's response to this commercial intrusion on our 2m band.

This lack of response to inquiries, and lack of transparency in its operating is quickly becoming the trademark of RAC.

UPDATE   As of September 30th.  Bob-VE3MPG and Peter-VE3HG have both updated their Blogs on this subject.  Bob has received material from Industry Canada and has posted it.  Their blogs can be found at:

I recommend that all hams read these blogs.  They are very interesting reading.

Posted by Blogmaster at 22:09 No comments: Links to this post

Man, what a weekend!!  The Ottawa Valley QRP Club held their annual Chilicon over the weekend of 17-19 September at Rideau River Provincial Park, and a good time was had by all that attended.  It was also QRP Afield weekend as well. 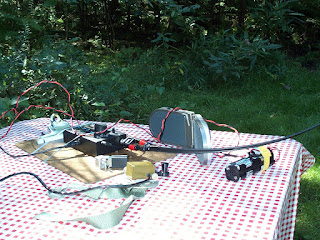 Rideau River Provincial Park is a very clean park, and the camping sites are very well kept.  There was a good number of people in the campground but it wasn't full, nor was it noisy.

Only four of us camped there for the weekend, Mike VE3WMB, Martin VA3SIE, Jim VE3XJ and myself.  It would have been nice to have more camp with us, but we did have a good number of visitors come out on Saturday to do some operating with us. 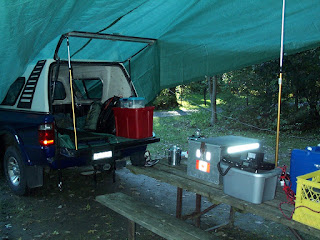 This was the first time I had camped using the new truck.  It was pretty comfortable, and I'm sure if it had rained I would have stayed dry.  As I had not been camping for a year or two, it was an interesting time trying to find all my gear.

The bands were in good condition, and I made several good DX contacts on 20m SSB running only 10 watts. First up was Gerry F6IGS in Bordeaux, France. Then it was Al YV2BYT in South-West Venezuala, and finally Nikola 9A9AA in Zagreb, Croatia. As usual I used my FT-857D and a vertical Buddipole. I also had QSO's with a dozen or so amateurs across North America. The campsite was a great place to operate from.

It was a real pleasure to meet, and talk, to the guys from Ottawa, especially the two Bob's, VE3MPG and VA3RCS.  I really learned a lot from them all. Mike VE3WMB decided to take part in the Feldhellschreiber Sprint on Saturday lunch time.  This was the first time I had seen that mode in action, and many thanks to Mike for taking the time to explain it all to me.

Hopefully Chilicon will become an annual affair for the QRPer's in Eastern Ontario, I'm already planning to be there in 2011!
Posted by Blogmaster at 22:25 2 comments: Links to this post