Most of the week was spent playing radio or repairing and building the off-centre-fed (OCF) dipoles we used on the weekend.  Our original 160m OCF and the 80m OCF were both damaged in the winter and spring storms we had, and more radials had to be made for the 40m vertical to improve its performance.

Most of the guys arrived Friday morning and we were soon busy putting up sleeping and operating tents, as well as shooting lines over the very tall trees on the property to get the antennas high up in the air.   Eventually we had the 160m OCF up at 90' and two 80m OCF's up at 80'.  Tim VA3TIC arrived with his trailer mounted tri-band beam and that was also soon put together and ready to go. By the time this was all done it was time for a shower and we were all off to the Picton Golf Course for a fantastic dinner.......and a couple of cold ones.

Saturday was spent making sure all the gear worked and doing radio checks to make sure our sets of notch filters were doing the job as designed.  This year we had very little interference between stations, so our rebuild of the notch filter system earlier in the spring did the job for us.

Field Day kicked off for us with some ridiculously deep QSB.  One moment the station was 59+ and then it was completely gone.....never to be heard from again.  All I could hear on 40m was a wall of muffled sound, all calling CQ, and I couldn't pick out any individual calls. Eventually things started to settle down and I started to make contacts, but it was very hard going on 40m, in fact the whole weekend I only managed a total of 100 contacts.

About two hours into the event we had a total 160m OCF failure, and we had to down our mics and bring down the 160 for a rebuild.  The balun failed under the stress of hauling it up the tree, so it was fixed, the 160 was hauled back up 80' and we were back in action.

Our setup this year was a bit different than in years past.  We had three SSB stations on 80m, 40m, and 20m, as well as an all band Digi station and an all band CW station.  This setup worked very well for us and we will continue with this setup next year as well.

We also had a 31' multi band vertical for the digi station as well an another 80m OCF dipole, and a portable, trailer mounted, three element beam for 20m SSB. The 40m SSB station used a WW2 No 19 Radio Set mast.....it's 73 years old this year and works extremely well on both 40m and 15m.

Apart for some much needed stops to fuel up on food it was go-go-go for us. While I haven't seen our final score yet, I do know we beat last years QSO total so I'm expecting good news on that front.

Of course sometimes there has to be a down side to a story......and there is.  Once I had returned home I was putting my FT-950 back on the bench when it suddenly left the Pelican case and hit the floor....after dropping four feet.  So, it's off to Toronto and Radioworld to see what they can do to get it working again properly.......sick to my stomach?  You betcha! 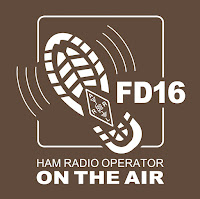 Field Day, or in my case "Field Week", is coming up starting next Tuesday.  I'll be kissing the wife goodbye for six days as I head out to Hay Bay, our field day site for a week of radio fun!  This is fast becoming an annual event for Don, VE3MNE, and myself.

This year we will be back out at Hay Bay operating for Field Day 2016 as a 5A station, three SSB, 1 CW, and 1 Digital stations.  This should get us the maximum amount of points we can earn, and perhaps we can beat last years score.

There is an array of antennas up on the property, right now there is a 160m OCF Dipole, a 80m OCF Dipole, and a 40m/15m 1/2 wave vertical.  Next Saturday morning the rest of the antennas go up.  There will be another 80m OCF Dipole, a portable 25' tower with a 3-element beam, and two 31' multi-band verticals.  This gives our operators some good options in case the bands are not the best.

Most of our week will be spent relaxing and experimenting with antennas and radios to see what we can get them to do.  There might also be some fishing and a bit of reading going on as well.

So far the long-range forecast looks like there may be a bit of rain on Saturday, but it looks pretty good to me.

Have a listen for VE3FRG, 5A, ONE, and have a great FD weekend.

It's been a very busy weekend here in Kingston as the Rideau Lakes Cycle Tour took place and the Frontenac Amateur Radio Club provided communications for it.  Including setup and tear down time we were on the job twelve hours on Saturday and seven on Sunday, and 0445 came real early Sunday morning.....

The weather was not the warmest over the weekend and we saw very little of the blue skies we looked forward to.  In fact we spent most of the weekend in sweatshirts and jackets to stay warm.   Instead of good weather we got high winds and a bit of rain.

Thanks to the rain our setup at Perth Road Village was a bit muddy for Don and I, and the winds did not help getting the 24' mast up into the air.

We had two stations on the air at Perth Road Village.  One was a liaison station on the VHF Lanark Net and the other was our own net control on the UHF Frontenac repeater.  We had a 5/8 ground plain 2m antenna on a 24' mast and a 7 element yogi for 440 on a 16' painter pole.  Both worked as designed.

There were 2023 cyclists on the road at any one time this year.  The tour goes from Algonquin College in Ottawa to Queen's University in Kingston on the Saturday, and on Sunday it goes back to Ottawa over the same routes.

Over the weekend the communications teams only had to do two 911 calls for hurt riders, but due to the rain and cold temperatures on Sunday we had a lot of requests from the cyclists for pickups and rides as they dropped out as they were not dressed for the cold.

We have some changes to do for next year, they have moved our usual site at Queen's to a new location at the other end of the campus. Unfortunately the new location is in a very bad location for radio work.  So it looks like we have lots of testing to do.

It was great to see our old friends from Ottawa, who provide the mobile communications in the support vehicles on the route.

Posted by Blogmaster at 21:54 No comments: Links to this post 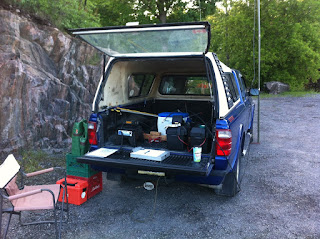 Coming up this weekend is the Rideau lakes Cycle Tour.  This year my club is providing communications from nine locations instead of our usual five, so we are spread quite thin this year.

As usual 2300 bicyclists will thunder down County Roads 10 and 11 from Ottawa and Perth to Kingston on Saturday, and return home to Ottawa on Sunday using the same routes.

The weather isn't looking too good for Saturday right now, but I'm hoping that will change over the next two days.....why not?.....the forecast has changed every day this week so far.

I've spent the past few days sorting out my portable VHF and UHF equipment for this activity.....now if I could just remember where I put the 2m/440 dual band antenna I'd be a happy camper..... It's amazing just how much equipment one of these events actually requires to make it a success.

Once this event is over it's then down to the final planning for Field Day.
Posted by Blogmaster at 22:46 No comments: Links to this post