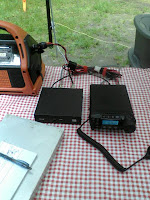 It's looking like it will be a busy summer for portable operating this year, I'm hoping the weather is going to cooperate!

'Tis the season to be outside playing radio, not cooped up indoors in the shack.  Try some antenna experiments, find a hilltop to work from, activate an island, activate a lighthouse.....there's always something to do when the weather is good....and some of us "nutcases" even do this in the winter!

Tucked in with all those dates is July 4th which just happens to be my 25th wedding anniversary.  How she puts up with me is one of lifes big mysteries!! Anyway......we'll see if I'm still alive at the end of the month!
Posted by Blogmaster at 17:40 4 comments:

What a superb weekend!!  Don-VE3MNE, Tim-VA3TIC and myself drove out to Hay Bay, about 45 kms west of Kingston, around noon on Thursday. We were joined by Richard-VA3VDP late Friday, and Derek-VE3HRW on Saturday.  We were operating at the cottage of VE3MNE, and a beautiful location it is.

The weather was fantastic.  Lots of sunshine and blue skies for most of the weekend.  We did get a small amount of rain and some heavy wind on Thursday evening, but it didn't last long and the Hay Bay Amateur Radio Club was soon back at it laying out coax and preparing the antennas.

On Friday we sorted through our miles of coax fixing connectors as required, giving our notch filters some much needed maintainance and sorting out the operating positions.  As per our well established field day tradition, we went out for a steak dinner at the Wellington Grill in Prince Edward County and really had a good time.
﻿

While at the Grill we all gave a farewell toast to our good friend John Snasdell-Taylor VA3GST, who sadly became a silent key a few days previously.  John, who was an engineer on the design and development team for the Canadarm, the space shuttle remote manipulator system, was an absolute gentleman.  He'll be missed by us all very much.

80m and 160m didn't provide us with much business and those bands had extremely high noise levels, but we still managed over 150 contacts on them.  The 40m band was a complete zoo with stations on top of stations all calling "CQ Field Day!!!".  I have to admit that it took a while for my ears to get used to the over abundance of signals and to be able to sort them out in my head.

After a few hours we had to do an antenna change for the 20m station.  The 20m Delta Loop wasn't working as efficient as it should have been.  With seven antennas in the air it was an easy job to switch things around without disturbing too many operators.

15m came, went and came back again.  When the band was working it was hot, and we managed to get most of the western US and Canada on it.  We even had a station from Northern Serbia answer our CQ.
﻿
﻿Richard-VA3VPD, the newest member of the Hay Bay Amateur Radio Club, operated our digital and CW station.  This was his very first field day, and what a superb job he did.   Richard operated on all bands and had the use of two antennas, a 80m OCF dipole and a 31 foot vertical, and he used both of them to his advantage.

All too soon Field Day was over and the bands magically went silent....well, the Sunday hemorrhoid nets were still in full swing complaining about the damn contesters, and the hillbilly nets from the deep south were swopping moonshine recipes, complete with their usual colourful language, but apart from them the other 35,000 hams went quiet.

The lack of contacts from Florida was very noticeable this year.  It wasn't until we got home and saw the news about the the bad weather they are having that we realized that they had other things on their minds than taking part in field day over the weekend.  Our thoughts and prayers go out to them all and we hope they and their families are safe and dry.

As a final thought the Hay Bay ARC would just like to point out to a couple of dozen hams that there is no prize, or certificate, for the station who can say their callsign the fastest and that we are sorry we could not understand your callsign well enough to establish contact.  Perhaps next year you could slow down?

I received the following email in my inbox this morning from the Prince Edward County Radio Club:

I am pleased, honoured and excited to announce that Aaron Wiik VE3UDA,
10 years old, has passed the Basic Amateur Radio exam with a score of 74%.

Both Aaron VE3UDA and his dad Peter VA3ORU (passed with honours) were students of our Fall 2011 course. They live in Cherry Valley. So please welcome our new Hams to the Magic of Radio when you hear them on the air in the coming months.

Congratulations to Aaron-VE3UDA, and well done!!
Posted by Blogmaster at 16:55 No comments:

This past weekend saw the 41st annual Rideau Lakes Cycle Tour run between Ottawa and Kingston......and a great time was had by one and all.

For the seventh year running the Frontenac EmComm Group (FECG) provided the communications for the southern part of the route, between Perth Road Village and Kingston.  Ottawa ARES looks after Carleton University to Black's Corner's, and Lanark-North Leeds ARES looks after the middle section.  This year, all three groups, had over 40 operators working over the weekend.

Establishing comms was pretty easy this year using the VE3FRG repeater, none of the stations required a lot of power to reach it.  VE3FRG has a huge footprint and we used an awful lot of it.

However, trying to hit the Christie Lake or Lavant repeaters was another matter.   It seems my Ringo Ranger has an issue, and as a result has an SWR of 4.1:1 and was pretty much unusable.  So, using typical ham ingenuity, we put up a 5/8 mag-mount, but we had to mount it on a cast iron frying pan for a ground plane as it was the only item we had that the magnet would stick to.  We then put the frying pan on top of the village sign to get enough height to reach the Christie Lake repeater.......and I've no idea why Don carries a frying pan in his truck!!

We arrived on scene at 1030L, and the first rider went through our location at 1140L - flying faster than Bob-VA3QV's electric Vesper!!   Everything was going smoothly until we were informed of a memorial service being held in the village church, just across the road from where we were set up.  I think they expected us to close up shop and disappear, but with 2200+ cyclists coming through the village there was nowhere else for us to go.  In the end we simply turned down the radios so they were not blaring away, and asked the riders to be quiet and slow down by the church, which they all did with the utmost of respect, and that calmed the situation.

We ended up having some pretty heavy rain from about 1500L till 1630L.  The last rider blew through our location about 1730L and then we started the drive down to Queen's to play "tail-end Charlie" and pick up radio equipment there.

Sunday was a very early start for our portion of the event.  Out of bed at 0500L and on the road to Perth Road at 0525.  I past the first rider heading north at 0540L just past Hwy 401.  The fog on the Perth Road was very thick and visability was less than 50m at times.....kind of scary early in the morning with the deer out on the roads. 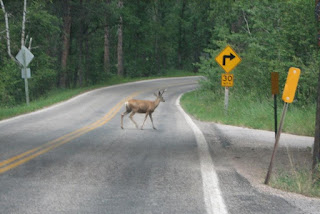 The weather was very hot and muggy, the Perth Road General Store was a hot spot for topping up on water and food for the long slog ahead.  The terrain around Perth Road is fairly hilly and the muggy weather must have made it pretty tough for some of the riders.

Lots of hams involved besides those manning the radio check points.  We had five or six mobile in various vehicles, doing pick-ups for riders who opted out, or the repair trucks.  It was nice to see the amateur community come together and doing some worthwhile community service.

For a look at how things played out from the Ottawa end, have a look at my old friend Bob's page - HERE.

'Twas a great weekend all-in-all, looking forward to next year, especially with the proposed changes.
Posted by Blogmaster at 16:14 No comments:

We've all heard about it, everytime you pick up a newspaper or read the news on the Internet, all you see are articles on the federal cutbacks and provincial cutbacks.

Apparently the cutbacks have also impacted the Ontario Provincial Police!  You'll notice their new cruiser in the picture below..... This picture was taken today on the campus of Queen's University here in Kingston.

This new model must be very good on gas...not sure how good it will be in a high speed highway chase.

Actually, all kidding aside, the Special Olympics are being held here in Kingston this weekend at the CFB Kingston Sports Complex, and police forces from all over the Province are here looking after, and mentoring, the kids, and this car was here for that event.  I'm sure it gave the kids as big a chuckle as it did me.

In fact the parking lot at Queen's looked like a police convention as there were cars from just about every police force in Ontario parked there.  Nice to see the boys in blue looking after the kids.
Posted by Blogmaster at 17:38 2 comments: