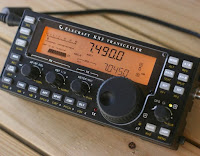 I've made a few contacts on the KX3 now and I'm very impressed with the rig.  People are correct though, the menu system takes quite a bit of getting used to and figure out.....but I'm sure I'll get used to it in the end.

I took it out to the park on Sunday to operate, but unfortunately the SFI was so bad it was just a waste of time.  It seems we had a minor solar storm.

Although operating the radio was a waste of time, I did take time with the help of Rick, VE3ORY, to cut to the correct length the new Packtenna I bought several months ago now.   It will be interesting to see how this antenna performs with the KX3.

Normally when I head to the park I take a pile of equipment with me, weighing several tonnes it seems.  That has changed, I can't get over how light and small my portable kit is now.  My sore back thanks me.

Hopefully, although the weather is starting to turn and get cooler, I will still be able to get out and put the radio through its paces before the snow flies this winter.  It will also make a change for Winter Field Day as it's small enough to operate from the front seat of my van for that event....I might even be able to stay warm.


Posted by Blogmaster at 08:41 No comments: Links to this post 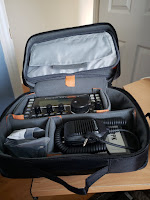 A new radio arrived at the QTH today, a brand new KX3....with all the bells and whistles.  I've wanted one of these radios for a good number of years, in fact ever since I saw Steve, WG0AT, try one out.  Actually, at the time Steve was trying out KX3 Serial Number 001.

I've heard it's the Rolls Royce of QRP radios, well, we will see this coming weekend when it gets taken out on it's first trip to the park.  I will post a report on how that goes.


It's back to reading the manual now....I don't want to break it on the first time to the park.
Posted by Blogmaster at 17:22 1 comment: Links to this post

Coming up on September 29th, Pierre, VE2GT will be activating Grosse Ile – QC010, and the Irish Memorial National Historic Site CNPOTA QC24.  The Island is also POTA VE-4910 and VEFF-1507. 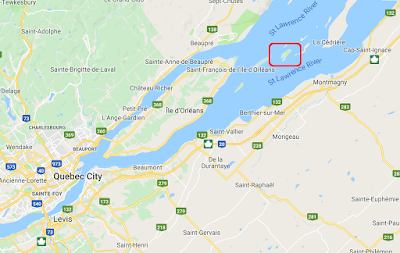 Posted by Blogmaster at 22:20 No comments: Links to this post

Well, another Chillycon is over, and what a weekend it was!  Weather wise it was fine, except for Friday night when the winds got up and torrential rain fell for most of the night.  Luckily we all stayed dry and survived.

Attendance was down a bit this year, there seemed to be only a few from Ottawa.  The guys from Kingston and Montreal made up for it though.

Dave, VA3ORP, once again brought the portable bar, and the single malt flowed as usual, and the Pizza supper on Saturday evening was as good as ever.

The propagation for the weekend was: SFI=68, SN=0, A Index=5, K Index=1.  Those numbers did not change all weekend.

Over the weekend a European DX Contest was on, and Saturday afternoon saw us working into Europe at QRP levels with no problem.   I managed to work DL0HN, a club station near Stuttgart, and OM2VL near Bratislava with my FT-817D with 5w on SSB.  The antenna was a 66' wire into a 9:1 unun, and four 16' ground radials.   I also managed to put another 20 North Amercans in the log, including Rick, W6KH from Vista, California, another nice QRP contact.

Don, VE3MNE, won the DX Contest this year with a QRP SSB contact into Saudi Arabia.  He used an FT-857D, dialed back to 5w, with a 20m hamstick mounted on his truck.

Those who didn't make it missed a great weekend, and I'm sure Eric and Stuart will tell the guys in Ottawa just what they missed.  Of course Eric was not pleased that he, once again, did not win the DX Trophy, and is plotting to change some of the rules for next year in his favour.  We did, however, insist that he present the trophy to Don so he could say that at least he got to hold it this year.

Some more pictures of the weekend.......

Coming up on the weekend of September 14th & 15th, is this years edition of Chillycon.  This is the annual gathering of QRP'ers in Eastern Ontario, sponsored and hosted by the Ottawa QRP Club.

It's held each year at Rideau River Provincial Park, just across the river from the town of Kemptville. It's a small and clean park, and who cater for we amateur radio operators.

As usual a good group will be attending from Kingston again this year......if only to see what single malt scotch Dave, VA3ORP, brings with him.

The weather this year looks very different from last year, when we were
hit with a heat wave.  This year it looks like we will be back down to the
usual temperatures and with a bit of rain in the forecast.  We'll go fully
prepared for whatever Mother Nature can throw at us and see what
happens.

Bob, VA3QV, will be making an appearance for a few days, and he will
be available to sign autographs on Friday night.

Don't forget if you're going to enter the Chillycon QRP DX
Contest.....somebody has to beat Eric.

If you can't make it for the weekend, try and get out and join us for the Saturday, and our traditional Pizza Supper.  Bring your radio, there's lots of operating locations if you join us for the day. 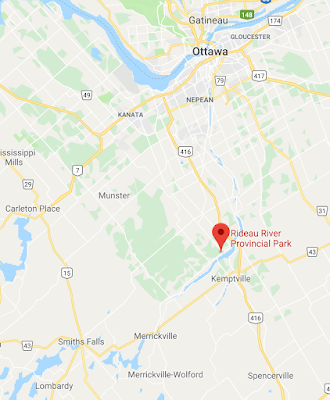 Posted by Blogmaster at 17:17 2 comments: Links to this post