Had to do a route change on the fly today as the flooding in south-central BC is quite bad.  I left Revelstoke and headed to Vernon and points south, eventually arriving at Highway 3 at the small town of Keremeos.

Lots of flooding of communities on the way down the Okanagan Valley.  The roads were good and mostly dry, but lots of municipal vehicles on the roads checking various flooding sites....and the army was out in force.

Made three 2m FM contacts today... Walter VE7BJB, and an old friend from Kingston, Tom VE7XTA surprised me on the Chilliwack repeater.  I was not expecting to hear Tom, but he was mobile and heading out of town for the long weekend.  I also made a contact with Bruce VE7TV in Abbotsford.

And so with 5005 km on the clock, we shut down the main engine for a week.
Posted by Blogmaster at 11:33 1 comment: Links to this post

It was 15C under brilliant blue skies this morning.

Worked two stations on 2m FM today, Kelly VE6KRK who was driving around Medicine Hat in his work truck, and Rob VE6CCL in Calgary.  The repeaters in Canmore and Banff where both silent, as was the Lake Louise repeater.

There were spectacular views through the Canmore - Banff corridor, the Yoho Valley, and the Rogers and Kicking Horse passes.  Just a fantastic day.....just what I needed, mountain therapy.

Drove through lots of road construction today with lots of stopping for blasting as they widen the highway.
Posted by Blogmaster at 11:20 2 comments: Links to this post

Today was not a good day.  It started out out OK, but things went a bit wonky.....

One 2m FM contact was made with Mike KM4OOC in Lignite, North Dakota, 129 km away.  Mike was monitoring the Arcola, SK, repeater.

About an hour into the trip I noticed that the van was pulling very hard to the right, and it was getting hard on the hands to keep it on the road.  I pulled over and checked the tires for a flat to see if that was the issue......it wasn't. 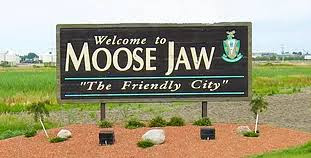 Eventually I had to make the decision to head to Moose Jaw and have the front end looked at.  After a quick phone call to a former Commanding Officer of mine, who lives in Moose Jaw, arranged an appointment with Kal Tire there, and off I went.   Thanks Lyle !!

It turns out that my directional tires had been installed, two weeks earlier, backwards!!!!!  So, with 3300 km on them that mistake was discovered.  I also needed to get a front alignment done.  Needless to say I am still not a happy camper....but we're back on the road.
Posted by Blogmaster at 11:13 No comments: Links to this post

Started the day with 12C.....getting better each day...and once again no rain.  Lots to see today, I went from never ending evergreen trees to wide open prairies in a few hours.  There are so many huge farm vehicles on the road, I have never seen tractors that big before.

I made a couple of 2m contacts today coming through Dryden, Scott VE3EXT was mobile heading north to Sioux Lookout, and Woody VE3JJA down in Sioux Narrows.  Both these contacts were made on the VE3DRY repeater.  The guys in Dryden really have a great repeater system with a large covered area thanks to linked repeaters.

It seems that the Hadashville and Falcon Lake repeaters are now off the air.

The weather is holding up great this trip, none of the non-stop rain I had the last time I made a trip out west.
Posted by Blogmaster at 10:59 No comments: Links to this post

It was another brisk -3C morning when I got on the road today, but the skies where a nice shade of blue.  Another day was spent travelling through miles of wheat fields, most of which were being plowed ready for the fall harvest.

No contacts were made today on the 2m repeaters along the route, even Winnipeg was quiet.

I did however pass a milestone, about 11:00 am local time I passed the geographic centre of the country, so I'm officially in Western Canada.

Tonight I'm camping at the Deleau-Sifton Centennial Campground in "Downtown" Deleau.  This is a very small village of three houses and 50,000 head of cattle.  The campground is free, but donations are welcomed, and is on the former ground of the village school which was demolished in 1965.

Off to Gull Lake Saskatchewan tomorrow, hopefully the repeaters will be a bit more active.


Posted by Blogmaster at 23:17 No comments: Links to this post

No contacts were made today at all.  I had no response on the Thunder Bay, Upsala, and Ignace repeaters.  Hopefully that will change tomorrow when I go through Dryden.

It was -3C in Wawa this morning when I woke up, in fact the local lake was still frozen!

Actually it was a pretty good drive today, except for gas being at $149.9 at most places.  The scenery around the top of Lake Superior is fantastic, the large rock formations really have to be seen.  Lots of ice still out on the big lake.

It's a quiet night here in Ignace, and tomorrow we're off to Deleau, Manitoba. 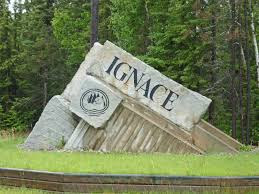 Posted by Blogmaster at 21:12 No comments: Links to this post

Only one contact was made today, that was with Dave VE3EGC, in Echo Bay.  I reached him on the VE3SJI repeater on St. Joseph's Island.  I actually called in to see him and Jackie his XYL, and was treated to great coffee and fresh home made muffins.  For those of you who do not know Dave, he's the regular net controller on the 40m Trans-Provincial Net on Monday and Tuesday, between 10 and 11 am, on 7.100.

After that visit the day went to hell.  I continued down Hwy 17 and went through Sault Ste Marie and eventually reached Batchawana Bay where the traffic was at a complete stop, and had been for about 12 hours at that point.  Apparently a very large road culvert had collapsed and a huge sinkhole had opened up and completely closed the highway in both directions between Wawa and Batchawana Bay.  The local police did not expect the highway to open again for at least 24 and perhaps 48 hours.

What to do?  Well, after about another hour of waiting to hear something the large trucks started to be turned around to head back to Sault Ste Marie to a large truck stop.  However.......as I was standing on the side of the highway wondering if I should just turn around and go home, and truck pulled up alongside me and the driver asked where I was going, so I told him.  He said "follow me, I know a detour"......and we were off!!

What followed was a 5.5 hour, 490 km mystery tour of the Northern Ontario bush.   I followed the truck back down the highway to Thessalon, and the followed him north on Highway 129 to Chapleau.  Highway 129 may officially be called a highway, but the term "Goat track" actually comes to mind.  Once we reached Chapleau we turned west on Highway 101 and eventually reached Wawa via the back way.   Along the way several of Ontario's largest inhabitants were seen (we actually saw 6 of them along the way).....lucky for me the truck was leading the way as I didn't want to hit one if it came onto the highway.

It was nice to find a spot to sleep that night, it was a really long day.


Posted by Blogmaster at 20:33 No comments: Links to this post 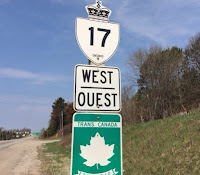 Let me start by saying.....not a drop of rain was to seen today !!!  It wasn't very warm, in fact it was only 5C when I started and didn't get much higher than that for most of the day. BUT.....the skies where a beautiful shade of blue.

I was also fortunate to have had very light traffic through the Madawaska and Ottawa Valley's, it wasn't until I neared Sudbury that the traffic increased.

2m activity today was also pretty good......in fact a 400% improvement from four years ago when I did this trip.  Four contacts today, 2 made on the VE3FRG repeater in South Frontenac when I was north of Napanee.  Don VE3MNE and John VE3WTN both answered my call.  I put another call out on the VE3UCR repeater at Foymount, and was rewarded by a call from Irv, VA3IRV.  The last contact of the day was with Rusty VE3WVA on the VE3RMI repeater on Manitoulin Island.  Thanks for helping me pass some time on the trip guys !!

It was a 750 km day today, done in 8.5 hours, and I ended up in Blind River for the night.  Tomorrow it's off to Terrace Bay, so a shorter day on the road.
Posted by Blogmaster at 20:20 No comments: Links to this post

It was a well spent afternoon today, two hours and 110 repeater frequencies inputted later, the 2m rig in the van is now programmed and ready to go.  It's interesting that I'm following exactly the same route as I did four years ago, and it was 137 repeaters then.....somewhere along the way we seem to have lost 27 repeaters.

The van is serviced and ready to roll.  I have the same bunk in there that I had in the back of my old pickup truck.  It fits perfectly, in fact I have a lot more room in the van than I had in the truck.

I think part of the reason I have so much room in the van is that I'm taking about a quarter of what I took last time.  The camping equipment has been cut to the bone, and the radio gear has been cut back and put in three small ammo cans.

Antenna wise I'm taking my Buddipole system, my 31' multi-band vertical, and my SOTA Bandspringer, as well as a 2m roll up J-pole.  I figure they will cover any thing I want to do.

Last Sunday was spent checking out the radio gear and antennas.  Everything looks good, so hopefully a lot of contacts will be made this year,......well, we will if the propagation improves!!

Posted by Blogmaster at 22:42 No comments: Links to this post