It may be Saturday but I was still up at 0500 local to get ready to go to Fort Henry Hill to play radio and test out a new antenna that Tim, VA3TIC had made.

The first news about the "new" Fort Henry is that it is terrible.  They have now paved the parking lot making it almost impossible to use at any other time than very early morning, we should be OK between 0500 and 0800, but not later than that due to vehicle traffic on the site.

Secondly they now have a "rent-a-cop" on site who came over to ask what the hell we were doing, and thirdly the new visitors center built on the east side of the parking lot is filled with a dozen or so huge plasma screens, and we now have a noise floor level of S7 on all bands. 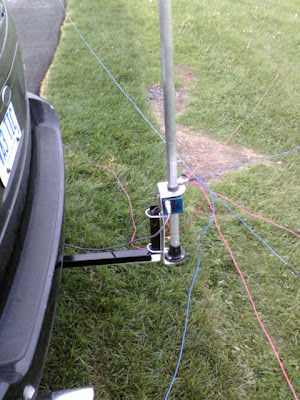 Back to Tim's new antenna........it's a homebrewed 31 foot aluminum vertical made with salvaged parts from long dead antennas.  It has four 31 foot radials and four 16 foot radials, and he has it mounted on his trailer hitch and uses a homebrew 4:1 balun with it.

It works very well and we were getting out with no problem.  First station worked with it was PI9SRS, a Scout Troop radio club in Spijkenisse, Netherlands, on 20m who gave us a 54.

Next up was a check into Ontars on 3.755 who gave us a 59.  The best contact of the morning was with ZL2WL, Wayne in Hastings, New Zealand, also on 20m who gave us a 55.  Not too shabby for a antenna made up of scrap aluminum.

So now the journey starts to find a new, quiet, hassle free early morning operating spot in or around Kingston.  Makes me wish I was back home in BC operating up in the mountains again. Oh happy days!!
Posted by Blogmaster at 11:04 1 comment: Links to this post

The Rideau Lakes Cycle Tour is THE Spring cycling event in the area with about 2000 riders going from Ottawa and Perth to Kingston on Saturday and back on Sunday. Four routes of varying difficulty are offered. The Tour is wholly organized and supported by Ottawa Bicycle Club volunteers.

The majority of riders come from Ontario and Quebec but there are also entrants from many of the other provinces, the United States and occasionally, even from abroad. 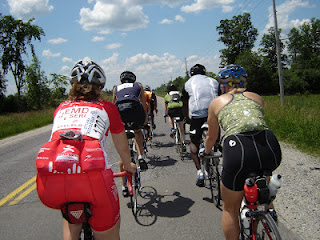 This year is the 41st year the ride has taken place and the 38th that amateur radio has provided communications support for the ride.  The Frontenac Radio Group provided comms from Perth Road Village to Queen's University, and has done for 5 years.

This year we will be operating five radio checkpoints, Perth Road Village, Loughborough Lake, Inverary, Glenburnie, and Queens University.  These locations will be manned for both Saturday and Sunday.

This year we are trying something different.  The Station at Perth Road Village will have two radios, one on the VA3TEL 2m repeater at Christie Lake and the other on the VE3FRG repeater using the 70cm link.  Hopefully this will stop any interference between the two radios.  In the past these two radios have both been on 2m, and we have had several interference issues.

Here's hoping the weather cooperates this year.
Posted by Blogmaster at 21:32 No comments: Links to this post

Today is a non-ham radio blog entry……which I do every once in a long while.

Some of you may have noticed the photo of the Chinook Helicopter at the top of this page. That photo was taken at a small gravel airstrip on Ellesmere Island called Eureka in the high Arctic. I had the pleasure of spending three summers there during the 1980’s flying as a Loadmaster on board the Chinooks of 450 Transport Helicopter Squadron.

In 1996 Canada retired its Chinooks and sold them to the Royal Netherlands Air Force where they continue to soldier on and fly today. In fact until we bought our own, Dutch Chinooks actually carried Canadian soldiers in Afghanistan…..kind of ironic!

Canada disbanded 450 Squadron and went without heavy lift helicopters until 2005 when we purchased several ‘second hand’ Chinook airframes from the US Army, and used them with great success in Afghanistan. They filled a need, and probably saved the lives of numerous Canadian soldiers who could now fly safely into camps and the out-stations instead of driving in vehicles on the IED infested dirt roads. 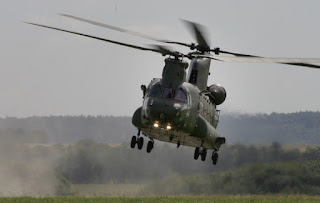 So why am I writing about this today? Good question. Today, a day I never thought I would see, the Minister of National Defence announced the reformation of 450 Tactical Helicopter Squadron. The squadron will be based in Petawawa, Ontario, and will have 15 F-Model Chinooks. These Chinooks will have a heavy lift capability to carry up to 40 personnel or 11 363 kilograms of cargo.

I’m also extremely pleased, and proud, that LCol Duart Townsend will be the first Commanding Officer of the reborn 450 Tactical Helicopter Squadron. LCol Townsend was the very last Chinook pilot to be trained as part of the original 450 Tactical Helicopter Squadron before it was disbanded in 1996. We veterans of the original Squadron can rest assured that our customs and traditions will be passed on to the new Squadron by the new Commanding Officer.

For those ex-members of 450 Squadron, today’s announcement is a great thing. It ensures that the history we made in our youth will not be forgotten. To the ex-members it also means that the aircrew, and support crew, who died in the flying accidents aboard Chinook’s 147001 and 147002 will be remembered and honoured by the Squadron, and not just by those who remember them.

May the new 450 Squadron only have 'Fair Winds and Blue Skies'!

A couple of years ago I read an item on the blog of Martin VA3SIE on his latest canoeing adventure on Joeperry Lake in Frontenac Provincial Park. He was using two antennas on that trip, one was a 28’ vertical and the other was a 90’ inverted-L. It was the 28’ vertical that caught my attention as being a city dweller, space is at a premium on the antenna farm out back.

I emailed Martin a couple of times about it and Martin told me that it wasn’t the best of antennas, but would do in a pinch. Still intrigued about it but busy with other things, it went on the back burner for a while. It wasn’t until the Ottawa Valley QRP Societies annual “Chillicon” gathering of September, 2011 that I finally with the help of Jim-VA3KV made one. I used a 31 foot MFJ collapsible fiberglass pole as the support.
﻿
﻿ Originally Martin made his with only one 16 foot and one 32 foot radials, and I made my “Chillicon Special” using only four 16 foot radials. Right off the bat it worked very well - allowing me to check into the Trans-provincial Net on 40m and Ontars Net on 80m as well as numerous DX contacts around the world.

Last weekend I was cleaning out the garage, getting ready for the upcoming big move, I dragged it out and set it up again. This time I added two 32 foot radials to the original four 16 foot radials. What a difference that made! Using my IC-703, the first SSB contact was on 20m with W4P, a special event station in St. Petersburg, Florida, who gave me a nice 58 report.

Since then I have worked Kuwait, Dubai, Sweden, and Morocco with this antenna. I have a suspicion it’s going to get a lot more use up on Fort Henry Hill this summer on our very early Saturday morning get-togethers. I might even add another two 32 foot radials and see how that improves the overall performance.

This one is a keeper.
Posted by Blogmaster at 17:29 No comments: Links to this post

It's getting to be that time of year when we start thinking of Field Day, that joyous weekend of 24 hours of non-stop ham radio.  This year it falls on the weekend of June 23 and 24.....mark it on your calendar right now.  The full set of rules for 2012 can be found HERE.

Now normally the radio club I belong to drives out to Hay Bay to the cottage of Don, VE3MNE, and spends a delightful weekend at his cottage.  Last year, according to the scores published in QST we came third in North America and first in Canada in the 5A category.

So this year we find ourselves in the position of having out grown Don's cottage and in need of a second operating location.  There really are not that many good locations around Kingston where we can conduct Field Day.  But this year we have hit the jackpot of all Kingston locations. 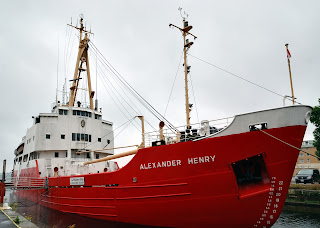 Many thanks must go to Ron, VE3GO, who has managed to get us permission to conduct Field Day from aboard the retired Canadian Coast Guard Ship Alexander Henry, currently tied up next to the Maritime Museum of the Great Lakes here in Kingston.

CCGS Alexander Henry is a former Canadian Coast Guard light icebreaker and buoy tender on the Great Lakes.  Built by the Port Arthur Shipbuilding Company in what is now Thunder Bay, she was launched in 1958 and retired in 1984.  She has been laid up in the drydock at the Maritime Museum for a number of years and is actually run during the summer months as a Bed and Breakfast location.

So give a listen for VE3FRG this Field Day, the station will be operating from the actual radio room aboard the ship.
Posted by Blogmaster at 13:31 3 comments: Links to this post