Another successful field day is over!   This year Frontenac ARES operated as a 5A station, covering all bands from 160m to 6m.

Our weekend started early Friday morning when myself, Don-VE3MNE, Tim-VA3TIC and Dave-VE3DZE met for breakfast at the Star Diner on Princess Street.  After firming up some plans we left for Don's cottage on the shore of Hay Bay, about 45 Kms west of Kingston.

The gang arrived at the cottage about 0930 hrs and first to go up were the antennas.  We erected a 160m OCF dipole, two 80m OCF dipoles, a 20m Delta Loop, a 15m vertical and a 10m / 6m fan dipole, and we also put up three screen tents, two for operating and the third for eating.   It was a long busy day and we didn't stop to have lunch, about 1900 hrs we left for Picton to have supper at the Texas Grill.  This is the fourth year we have supper there, and this has now become one of our field day traditions.

On Saturday morning the rest of the crew showed up, George-VE3SIQ and Martin-VA3AKY, and got their stations put together.  Once everyone was ready we installed our notch filters and tested for interference from each other.  Everything worked well except for the 10m notch which had to have emergency surgery performed on it, but we eventually had everyone up and running.

The SFI hovered about 96 all weekend with the 'A' index around 6 and the 'K' index at 2.  The bands where, for the most part, quiet, but not really good.

The 160m and 80m station didn't fair too well.  The 160m band never opened up at all and hardly any stations where heard on it, and the 80m band was only a little better.  The 40m station, while busy with stations on the eastern seaboard, never opened up and went long to the west coast.

The 15m and 20m stations carried the load with plenty of activity and many contacts between the two stations.  Our 10m station did very well, making over 100 contacts.  Six meters was a bust however.

I would be very remiss if I did not mention that this year was the very first field day for Tim-VA3TIC.  In fact Tim (now known as the "Duke") has only been a ham for about 6 months.  We put Tim on the 20m station, and stood back in amazement as he racked up 425 contacts!  It's great to see that his many years as a CBer were good training for him as a contester!

Overall we did 1014 contacts on five bands, and we're happy with that score.  After all the main thing is to get out there, do the set up, fix any interference issues, operate and have fun.......and we did that.  Many thanks to Don for the use of his property and for doing the cooking.

Oh yeah, the only thing with Tim is to keep him away from the trees at all cost.  He has a really nasty habit of attracting falling tree branches when we were putting up the antennas.

﻿
Posted by Blogmaster at 21:52 No comments: Links to this post

Another great weekend playing radio!!  This weekend, June 11th and 12th, was the 40th year the Rideau Lakes Cycle Tour has been run, and this year we had 2,115 registered riders on the different routes.
This is my 4th year as coordinator for the Frontenac County - Kingston section of the race and it was by far the best.  This year the weather actually cooperated......well, it did for the most part!  Mainly warm and sunny with just a little bit of rain late Saturday, but by then the vast majority of the riders where already safely at Queen's University.

The way the route is laid out it's about 356 Km for the round trip. The tour starts Saturday morning at Carleton University in Ottawa and returns their Sunday afternoon after an overnight stop at Queen's University in Kingston. The Frontenac County - Kingston section looks after Perth Road Village to Kingston, about a 33 Km section of the highway, manning communications check points at Queen's University, Glenburnie, Inverary, and Perth Road Village. 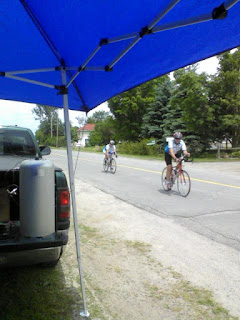 This year our section had 13 operators involved over the two days, including two guest operators from Belleville, Bill-VA3WOW and Bob-VE3QWB.  I'd also like to specially thank Ron-VA3ACZ from Ottawa, who stepped in at the last minute and helped out as a mobile unit on Sunday morning.

We also had two operators working from home, keeping us up-to-date with weather reports and standing by to make phone calls as required.  Many thanks to Ron-VE3GO and George-VE3GWS for doing this for us.

Saturday the first rider came through Perth Road Village at 1045, not a bad time at all considering the distance they had ridden, and they arrived at Queen's University at 1145, so not a bad run for them.  Most of Saturday was pretty cloudy, though warm, but at about 1600 local the heavens opened and we had huge downpour for about 45 minutes.  It could not have been too nice being on the road in that, and it was a good thing that 98% of the riders had already arrived at Queen's by that time.

Sunday was a very early start, we had to have an operator at Queen's by 0530 to advise the check points down route when the riders left and how many remained.  Unfortunately the first rider left at 0500, and we past him on the highway about 18 kms north as we travelled to Perth Road Village to set up there.  He eventually went through Perth Road Village at 0610 flying down the highway at great speed back to Ottawa.....he shouted that he had a date in Ottawa for noon.......I hope he made it!

This was the first year we operated using the VE3FRG repeater, owned by the Frontenac Radio Group, and it worked a real treat.  No problems and a solid performance far beyond the footprint we thought we had with it.  I think everyone was very pleased with it.

For the past 38 years Keith Fish-VE3XKF and his XYL Sally-VE3YSF, have coordinated the communications for this tour.  They starting out with just a couple of CB radios provided by the Ottawa XM11 club, to this year where we had 62 ham radio operators using three separate repeater systems.  This year is their last year doing this job as next year is their 50th wedding anniversary as they will be away over the dates of the tour on a well deserved cruise, and they have both decided that this is a good time to call it quits.

Sally and Keith I don't know what we will do without you guys out their on the course next year, but because of what you have both built and put together over the past few decades I'm sure we will do OK......but we'll be thinking of you guys!

Wanted: A "hug patrol" replacement.  Must be cute, cuddly, and give out great hugs!  Please apply to Don-VE3MNE, Official Hug Tester for Frontenac Radio Group. 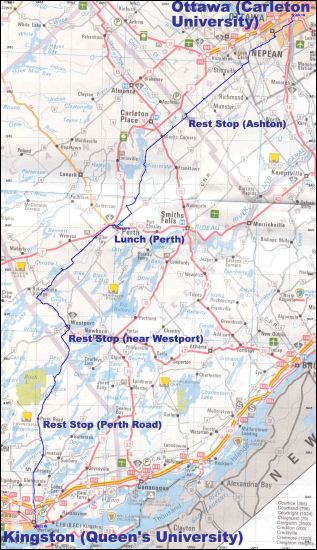