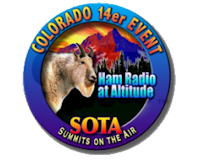 Coming up this weekend....August 4 & 5 is this years Rocky Mountain Rendezvous which operates alongside the Colorado 14er Event.

"Amateur Radio operators from around Colorado will be climbing many of Colorado's 14,000-foot mountains and Summits On The Air (SOTA) peaks to set up amateur radio stations in an effort to communicate with other radio amateurs across the state and around the world. Join in on the fun during the 27th annual event and see how many of the mountaintop stations you can contact. This year the event is expanded to include the entire weekend. However, many mountaintop activators will hit the trail early with the goal of being off the summits by noon due to lightning safety concerns."

I'm hoping to get out to Hay Bay and work a few using the clubs Field Day antennas. 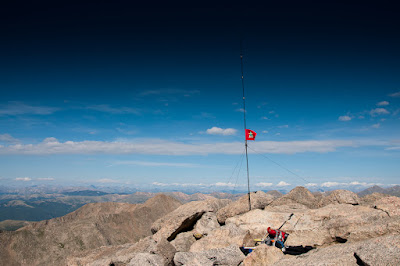 Posted by Blogmaster at 18:02 No comments:

Great day today out at the property at Hay Bay doing "Radio Stuff" with Rick, VE3ORY.

A few months ago I purchased a "Band Springer" portable antenna from SOTABeams in the UK......regardless of the "amazing reviews" on the SOTABeams website, I have never been able to get this antenna to work - AT ALL - so, I ended up with this wire antenna that just wouldn't tune on any band whatsoever.

A week ago I had an exchange of messages with Steve - WG0AT, about the wire antenna he uses on his SOTA activations.  It turns out that there was enough wire in the Band Springer antenna to remake it into a copy of Steve's antenna.

Rick and I got out the large tape measure and the Band Springer, and started to measure and cut it to Steve's antenna measurements.  Once it was cut and reassembled we hooked it up to analyzer and gave it a good checking over.  It works from 40m and up, and has a 3.1:1 SWR on every band, not good - but usable with a tuner.

My FT-879D was hooked up to it and we made three contacts in quick succession, K7V in Helena, MT; N4GNO in Alabaster, AL; and W9W in Oshkosh, WI.  All three gave me good signal reports after I asked for "true" reports instead of the standard "59", so I'm happy with this antenna.

For those interested in the details of the antenna, it was recut to a radiator of 41', a counterpoise of 17', and it uses a 9:1 unun.  In fact we cut two 17' counterpoises and used them both.
Posted by Blogmaster at 21:17 No comments:

This years IARU HF Championship is over.  I didn't work at it too hard as I really wasn't feeling too well yesterday, but I had fun.

The day started with some pretty quiet bands, there seemed to be very few stations calling CQ, and I worked those fairly quickly putting all of the North American and Caribbean zones in the log.  Propagation was not good, just ok.  At 1300 UTC on the 14th July the SFI = 73, SN = 0, A Index = 6, and the K Index = 2.  Those figures stayed pretty much stable for most of the next 24 hours.

There was some deep QSB on the bands on Saturday, which of course always struck at the wrong time.  Stations being received at S9+ would just disappear in an instant.  And then there was my all time favourites causing issues....the tuner uppers !!!  Why these jerks haven't learned to move slightly off frequency to tune up is beyond me....and why do they take 5 minutes to tune ???

It was about 1500 UTC when the first European stations started to be heard on 20m, and only the guys running "too much power" could work them at first...which is a good thing because they were then out of the way for we low power mortals to get in there and work them.   This opening to the EU lasted about an hour and a half, and I managed to work a good number of EU stations with no trouble using my 80m OCF Dipole. The good news is that the EU stations came back with a vengeance starting at around 2300 UTC and lasted until I shut down around 0300 UTC.

Although I managed to work less stations than last year, I still managed to put 42 countries in my log, and I'm quite happy with that.  My antennas worked as expected and as advertised.  I mainly used the 80m OCF Dipole, but did use the vertical every now and then.  Stations were worked on 40m, 20m, and 15m.  I didn't hear a soul on 10m or 80m all contest.

Surprisingly this year I heard no African stations.  Normally Morocco and Cape Verde are in there with a number of stations, but I didn't hear them at all.

My only real complaint..besides the tuner uppers....is for operators to slow down.  You need to leave some space in your endless CQ calls.  If you don't leave a space we can't get in there to answer you....and then we both miss a contact....oh yeah, and please us standard phonetics.
Posted by Blogmaster at 15:28 1 comment:

Coming up this weekend, what should be one of the best DX contests of the year, the IARU HF Championships.  Hopefully the propagation will be decent and the bands will work as they should.

The idea of the contest is to contact as many other amateurs, especially IARU member society HQ stations, around the world as possible using the 160, 80, 40, 20, 15 and 10 meter bands......I doubt 10m will have much action this weekend, but you never know, stranger things have happened.

Rules for the event can be found HERE.

Good luck to everyone taking part!!

Posted by Blogmaster at 17:10 No comments: