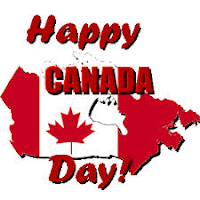 This year I plan to operate from home, and I'm thinking of entering as QRP, but I'm not sure the bands will support that power level right now........I guess it will be a last minute decision depending on the propagation.......which hopefully will be half decent.

Rules for this years event can be found HERE.

Hope to work you all on the bands !!
Posted by Blogmaster at 14:16 No comments: Links to this post

As usual I made the trek out to VE3MNE's property on Hay Bay, about 48 kms west of Collins Bay for the annual ARRL Field Day event, and once again I was not disappointed.

The weather forecast was not looking too good.......we were expecting rain and wind all weekend.  In fact we had very little rain and the wind was just enough that we had far fewer mosquitoes than usual...in fact we hardly saw any.....it was great.   The rain didn't hit until after all the tents and tarps were taken down and stored away on Sunday afternoon. For most of the weekend the temperatures hovered about 16C. 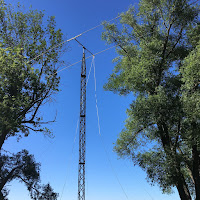 For antennas we had the usual 80m and 160m OCF dipoles, both up at 80 feet.  We use a No. 19 set radio mast, made in 1942, for 40m and 15m and we laid down ten 16 foot ground radials for that antenna.  Our digital station used an 80m EFHW in a "sort of" inverted L configuration.  We also had to erect a 40 foot tower with a two element tri-bander, which worked fantastically.

Our wire antennas were all rebuilt over the spring and pre-tested before we strung them up.  Everyone of them had excellent swr, and a tuner seemed to be optional.

We did have some bleeding over on various bands, especially with our cw station, but we worked around it and it ended up not really being a problem for the site.

The bleeding over was an issue for me personally.  I have known for a while, thanks to my air force service and flying Chinooks, that my hearing is going.  This year it must have got much worse.  It was particularly hard for me to pick out calls through the hash and other interference you get during a large contest like event.   It's at the point I will probably go to field day as "Chief Cook and Bottle Washer", and hand the 40m station over to a younger ham.......the joys of getting older !!

Speaking of noise.....has anyone else noticed that most of the stations using the onboard voice recorders are S9 +20 when the recorder is calling CQ....but when you answer and the person at the other end responds to you they are -3db under the noise floor ??   What gives with that ??

So another field day ends and we start planning for next year.....

Posted by Blogmaster at 14:20 No comments: Links to this post

This years edition of the Ottawa Bicycle Club's Rideau lakes Cycle Tour, the 47th year, was a great success.  We had no major incidents at all this year, which makes a pleasant change from some of the previous years.

This year the Ottawa Bike Club had 1800 riders registered for the tour, a bit down from past years.  The riders this year had absolutely perfect weather, we had blue skies and warm temperatures.  It was good to see many old friends providing support in the SAG and Repair vehicles, many we have known for 13 years now.

We had 10 communications posts in the Frontenac Region this weekend looking after two separate routes, and our initial call for volunteers was almost immediately over subscribed by our members.

Plans are already being made for next years tour.

Posted by Blogmaster at 20:41 No comments: Links to this post

We're back to blue skies this morning and a 9C temperature.

This is the last day on the road, it's been a long trip.   I made a single 2m contact today with Bob, VE3YX, on the Point Alexander repeater.  We had a long QSO on my way down the valley, in fact all the way to Pembroke.

I had light traffic all day through the Ottawa, Madawaska, and Bonnechere Valleys.  In fact it was the most relaxing drive of the whole trip.

Over all it was a great trip.  I made many more 2m contacts than I did on the last trip 4 years ago.  My number of HF contacts was also higher, and I only had my FT-817ND with me.....so you just never know what is going to happen.

The final mileage for the completed trop was 10,202 km. 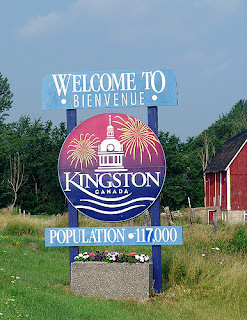 Posted by Blogmaster at 17:54 No comments: Links to this post 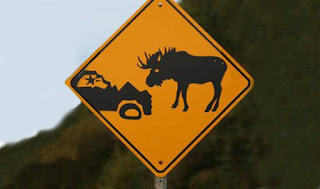 Driving between Ignace and Upsala this morning a huge moose, the biggest one I've ever seen, calmly walked across the highway as everyone came to a screeching halt.

In my five trips across the country I have never seen so many deer, elk and moose on the highways as I did this trip.  They where everywhere.

The Thunder Bay 2m repeater was the only one on my route today, and no contacts were made on it.

Todays drive was through miles and miles of trees covering rolling hills, between the curves in the road and the animals you had to stay alert.

Posted by Blogmaster at 17:44 No comments: Links to this post

A different start to the day today, it was 17C but the sky was an angry black colour threatening rain....which it did for most of the day. 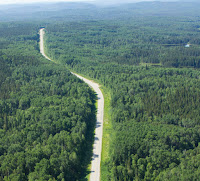 The drive saw me leave the prairies and enter the huge forests of north-western Ontario, which along with the massive rock formations made it a very interesting and scenic drive.

Only made one 2m contact today, that was with Gerry, VE4GCV, on the VE4WPG repeater in Winnipeg.  All the other repeaters were very quiet and I didn't hear a thing on them, in fact I'm sure a number of them are actually no longer on the air, but the repeater book still shows them as being active.

Today's final destination was Ignace, Ontario.  There's not much free camping around Ignace so hopefully I'll get there while there is still some light left so I can find a good spot to sleep.

Tomorrow I'm off to Salt Ste. Marie........getting closer to home!!
Posted by Blogmaster at 13:29 No comments: Links to this post

Today started at 13C and once again under beautiful clear blue skies. 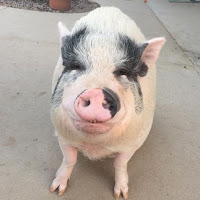 So last night I won a piglet.......yeah, a real, live. piglet at a 4H Club raffle.  What does one do with a live piglet when you live in a city almost 4000 kms away?   Well, you donate it back to the club so somebody who can't afford one can finally have one to raise and look after.....which is, after all, one of the roles of the 4H Clubs.

I did ask that the piglet be named "Derek", in memory of Derek, VE3HRW, a member of our radio club who died of cancer shortly before I started on my trip.  Derek would have had a good laugh over that, and at the same time would be thrilled that in his memory we were helping a youngster out learning how to raise and take care of the piglet. 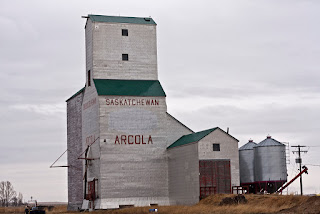 No 2m contacts were made today, but I only had repeaters in Arcola, Assiniboia, and Weyburn to give calls on.   There are not very many repeaters in southern Saskatchewan.

The final destination today was Brandon, Manitoba, where I will spend the night in a hotel...on a real bed....and visit with an old air force buddy.

Tomorrow it's off to Ignace, Ontario.
Posted by Blogmaster at 19:04 No comments: Links to this post

The day started at 5C under a nice blue sky......kinda cool this morning, but we are in the mountains.  There were very few people in Yahk Provincial Park last night, it's a fantastic little place, no showers and only pit toilets, but for $18 a night it isn't too bad....at least it was quiet.  It's a beautiful little spot, right on the Movie River.

The scenery was absolutely fantastic during the drive today, I seem to be buried in the mountains and have to look high up to see the peaks of the mountains around me.  Once again there are lots of deer on the highway, and you really need to keep a good lookout for them.

I made no 2m FM contacts in BC on the way home - the same as the last time I made this trip, but today I did make a contact on the Lethbridge repeater with Bruce, VE6ATY, and another with Kelly, VE6KRK in Medicine Hat.  Kelly and I had a QSO on the way to the coast, so it was nice to touch base with him again on the way home.

The destination tonight is Gull Lake, Saskatchewan, where I plan on staying at their municipal campsite.  I've been there before, it's a great site, clean hot showers and free wifi.  Oh yeah, it costs $15 a night....you can't beat that!

Posted by Blogmaster at 09:22 No comments: Links to this post

It's time to leave and head home.......always a difficult thing to do after a week with family.  It was 22C today under brilliant blue skies.

Final stop for today is Yahk Provincial Park, a little gem along the Moyie River.   There was very heavy traffic along Hwy 3 today with lots of Deer and Elk on the highway....in fact, more than I ever remember seeing before.  You needed 4 sets of eyes looking out today.

Highlight of the day was seeing 12 feet of snow at the top of the Salmo Summit at Kootenay Pass.  At  5,823 feet it was still pretty cool up there.

Calls were put out on the Abbotsford, Chilliwack, Hope, Oliver, and Creston repeaters along the way, but no contacts were made at all.

Tomorrow it's off to Gull Lake, Saskatchewan. 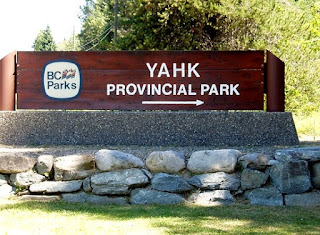 Posted by Blogmaster at 10:04 No comments: Links to this post

I managed a single island activation during my time on the west coast, Barnston Island - BC055, was the lucky destination.

Barnston sits in the middle of the Fraser River between Pitt Meadows and Surrey.  Accessible only via a short, free, five minute ferry ride, it's a beautiful spot to spend a day.  I was there over six hours and never saw another person.

The final destination was Robert Point, a small park area at the western tip of the island.  Parking is almost non-existent, in fact I don't think there is supposed to be any parking at all, but I managed to find a small spot that I could squeeze in the van.

The radio of the day was my FT-817ND and I used my 17' collapsible MFJ whip antenna with two elevated counterpoises set for 20m.  It worked exactly as I practiced with in Kingston before I left, definitely a keeper.

The ferry stops around 2300 hrs local so I was able to work late into the evening and put over 30 contacts in my log, mainly communist China and Japan with the odd Canadian and US station.  Not too shabby for a QRP operation.

Overall it was a very relaxing day and I really enjoyed myself.  I'll definitely be back there on my next trip out west.
Posted by Blogmaster at 15:50 2 comments: Links to this post