There's another local light now ready to be activated!  The Frontenac ARES Group recently "found" a local light that not many people actually knew about, and the light was not listed in the World List of Lights.....so off they wrote to the Amateur Radio Light House Society to see if it could be listed. 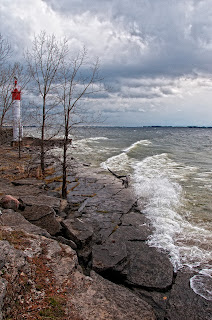 The location of the light will be a challenge to activate as it is a small area that is very well used by the locals.  The actual site is about two regular house lots in size, covered with some good sized trees.  I have a feeling that this site will have to be activated either early in the season, or very late in the season in order to escape the crowds that seem to hang out there on the limestone beach.

The good news is of course that Nicholson's Point Light is now also known as "Can-1425", its official World List of Lights number.

We're looking forward to next year when we can activate it.  Stay tuned for news on that.  I'm sure that on its first activation it will be well sought after by the hams who collect lighthouse numbers. We'll arrange to have it put on the DX cluster which is sure to cause a good pile up.
Posted by Blogmaster at 17:31